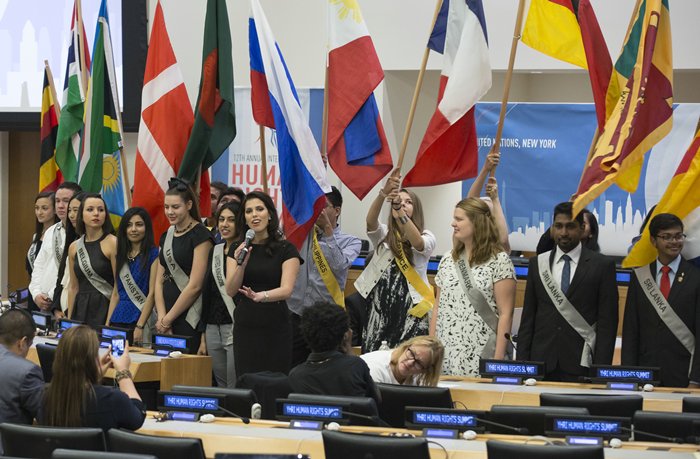 In December 1948 the General Assembly of the UN proclaimed a set of 30 rights, called the Universal Declaration of Human Rights, which every human being is entitled to.

“All human beings are born free and equal in dignity and rights. They are endowed with reason and conscience and should act towards one another in a spirit of brotherhood,” it says in article one of the declaration.

A survey has shown that only eight percent of adults and four percent of young people in the United States are aware of this important declaration. Therefore, the nonprofit organization Youth for Human Rights International (YHRI) and the Human Rights Department of the Church of Scientology International have joined forces to raise awareness on human rights. Both organizations are financed by the Church of Scientology.

“The purpose of YHRI is to teach youth about human rights, specifically the United Nations Universal Declaration of Human Rights, and inspire them to become advocates for tolerance and peace”, YHRI states in the summit’s event program.

Together they have organized the 12th Annual International Human Rights Summit 2015 which was held from Aug. 27 through Aug. 29 at UN Headquarters in New York. 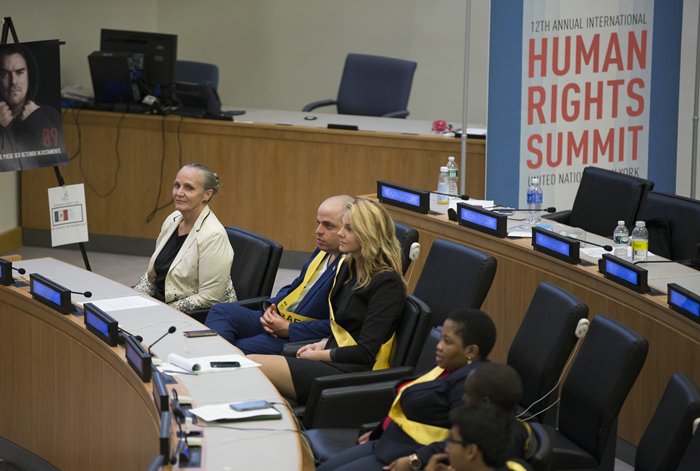 Young people from around the world have sent their applications to Dr. Mary Shuttleworth, President of YHRI, to become a part of this year’s summit. 35 youth delegates and 16 youth ambassadors from different countries were chosen to speak on their positions regarding the implementation of human rights in their home countries.

The summit opened with an address by Shuttleworth, followed by an international flag procession and a presentation of the youth ambassadors. Current youth delegates wore a yellow sash and last year’s representatives wore a gray sash.

Prominent guests, among others, included Ella Torrey, a former aide to Eleanor Roosevelt who led the committee that created the declaration at the United States Mission to the UN, and Amanda Mason, opera singer and Miss New York 2013.

Mason was one of the musicians who performed at the summit. Together with Chandler Mogel and Veronica Scorcia she sang “We are the World”.

During Mason’s Friday performance of “When you Believe”, youth ambassadors and delegates joined her on stage, each carrying the flag of their home country.

“It’s great to see that even though we’re 25, you know, or younger than 30, sometimes younger than 20, we can still make a difference. And that’s so empowering for anybody in any country to have”, Mason told EuropaNewsWire.

“Having the young adults be able to bridge the gap and make sure that our next generation is prepared for the next world […] and spreading the word, especially through social media, is huge”, Mason added in informal talks at the Scientology-influenced human rights summit.

Other artistic contributions included a violin performance by Dr. Kuo-Ksiang Hung, a poem by Dr. Melanie Curtis and performed by Samantha Christian, as well as a traditional Bangladeshi dance performance by Semonti Wahed.

“By teaching human rights through various means – from conferences and workshops to hip-hop and dancing – this message has spread around the world”, it says in the event program.

The DVD contains an introduction to the program, 30 one minute films with each explaining one of the human rights, a short documentary and a music video. These videos were also shown during the event. The booklet “What are Human Rights?” is available in 17 languages and contains a youth version of the Universal Declaration of Human Rights and background information on the topic.