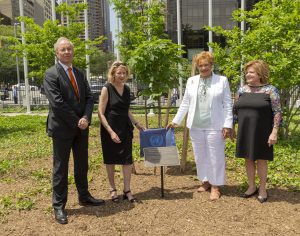 A dedication ceremony was held today to honor the legacy of Anne Frank and the six million who were killed during the Holocaust. A sapling was planted, the offspring of a tree that grew behind the house in Amsterdam where Anne Frank and her family hid from the Nazis from 1942 to 1944. The date was selected for the fact that it would have been Anne Frank’s 90th birthday had she survived the Holocaust. 12 June was also the date on which she began keeping her diary, in 1942. The ceremony was organized by the Holocaust and the United Nations Outreach Programme of the Department of Global Communications.