As Nauru Calls for UN Climate and Security Envoy and Curaçao Agrees, US and Russia Less Supportive - Europa Newswire 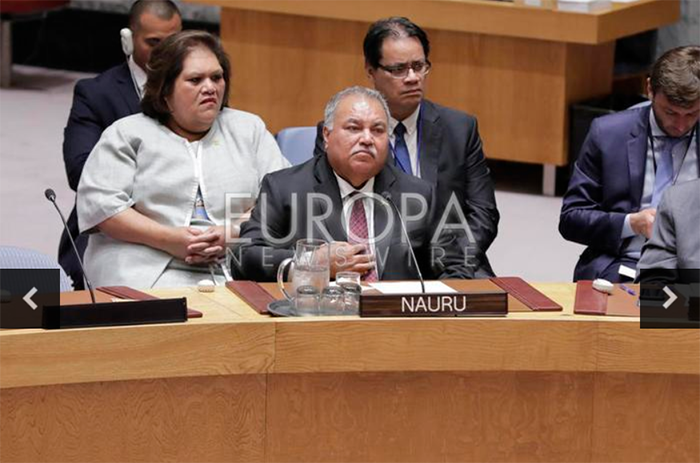 UNITED NATIONS, July 11 — Nauru is a small country in the Pacific Ocean, and getting smaller as the water rises. On July 11 its president Baron Divavesi Waqa proposed to the UN Security Council the creation on Climate and Security of a new UN envoy.

He outlined to the Security Council members improvements they need to make, saying “the Council needs better climate-related security risk information, analysis, and early-warning mechanisms to be able to make informed decisions and carry out its main functions – preventing conflict and sustaining peace. This is consistent with the intent of the 2011 Presidential Statement and fully supportive of recent Security Council resolutions on Lake Chad Basin, West Africa, the Sahel, and Somalia.”

Elected Security Council member the Kingdom of the Netherland devoted its speaking time to the Prime Minister of one part of its far-flung kingdom, Curaçao. Eugene Rhuggenaath, with Dutch Permanent Representative Karel van Oosterom sitting behind him, picked up on some of the same climate hot-spots cited by Nauru’s Baron Divavesi Waqa. He asked the Council members, “What if we had known 15 years ago that in 2018, millions of people in the Lake Chad region would need relief assistance to survive, with water stress as one of the threat multipliers? What if we had known that millions of people from Somalia would still be displaced against the backdrop of severe droughts? These questions may seem irrelevant, since we cannot change the course of history. But what we can change is how we apply the lessons we have learned so far.”

The United States, unlike for the previous two days’ debates on Children and Armed Conflict and Peace and Security in Africa was not represented at the July 11 climate meeting by its Permanent Representative Nikki Haley, but rather her deputy Jonathan R. Cohen. Alluding diplomatically to U.S. President Trump’s statements about the Paris Accord on climate change, Cohen told the Council that “we recognize the efforts of the United Nations in helping to advance our understanding of emerging issues related to human security, including this one. This Council most often is focused on armed conflict as the most conventional threat to international peace and security, but it is right that we also consider natural phenomena disasters such as droughts, monsoons, tsunamis, earthquakes, hurricanes, desertification, volcanic eruptions, and other such events. They have taken lives, destroyed homes, impacted resources, and caused widespread displacement both within and beyond national borders. Unlike conflict where there are sides to be taken, in response to these crises, we are all on the same side – the side of survival, of recovery, and of resilience.”

Russia, also represented by its Deputy Ambassador Dmitry Polyanskiy, was more direct in its criticism: “We are creating an illusion that the Council will tackle climate issues and that there will be some kind of turning point, he said, calling this a “misguidance”. He cited a different list of counties, chiding those who fail to acknowledge the adverse consequences of violent military operations and unilateral sanctions, as evident from experiences in Yugoslavia, Libya and Syria. He name-checked NATO, the North Atlantic Treaty Organization, where American President Trump happened to be on July 11 before his upcoming meeting with Vladimir Putin, saying NATO’s bombing of the former Yugoslavia caused a spike in cancer among people living in the affected area. In Libya, the bombing of oil fields led to significant damage to the atmosphere, also noting the adverse effects of the intervention in Syria and the fighting in Donetsk, Ukraine.

Whether the requested UN envoy on Climate and Security would address such contested issues is not known.