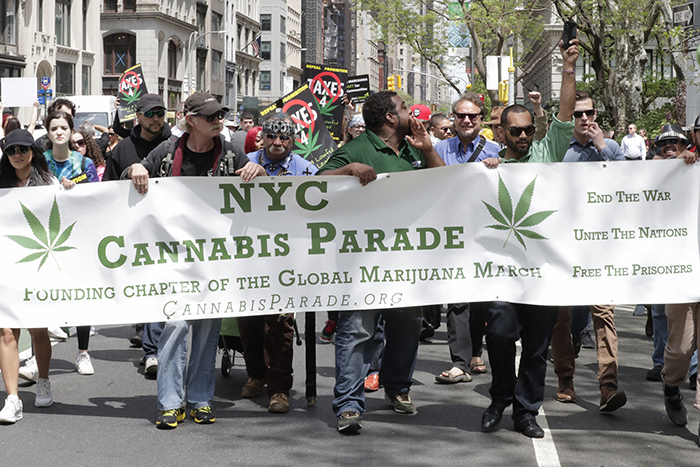 Midtown Manhattan, New York, USA, May 05, 2018 – Hundreds of Peoples Marched in support of the legalization of marijuana and Participated on the 2018’s Cannabis Parade & Rally today in New York City.
Photo: Luiz Rampelotto/EuropaNewswire

“Over the last 10 or 15 years, the American people’s attitudes have changed dramatically,” he said in an interview. “I find myself in that same position.” Global Marijuana March events will be taking place all over the world on May 5.

In New York City, Guardian Angels founder Curtis Sliwa is not only part of today’s Cannabis Parade – back on April 20, 4/20, he formalized his use of medical marijuana, at one of the new dispensaries in New York.

Howie Hawkins, the Green Party candidate for Governor, said at the parade that “we must demand more than our present ineffective medical marijuana program which seems primarily designed to enrich a few well-connected business people. Even though New York decriminalized small amounts of marijuana 40 years ago, local police especially in New York City have used the discriminatory enforcement of the law to target people of color.”

Cynthia Nixon, an increasingly high profile opponent to incumbent New York Governor Andrew Cuomo, admits she’s only smoked pot twice in her life but says, “In 2018, in a blue state like New York, marijuana shouldn’t even be an issue,” she stated. “If there was more political courage coming out of Albany we would have done this a long time ago.”

In a more detailed campaign statement Nixon says, “I believe it’s time for New York to follow the lead of eight other states and DC and legalize recreational marijuana. There are a lot of good reasons for legalizing marijuana, but for me it comes down to this: We have to stop putting people of color in jail for something that white people do with impunity. Eighty percent of the New Yorkers arrested for marijuana are black or Latino, despite the fact that whites and people of color use marijuana at roughly the same rates. The consequences follow people for the rest of their lives, making it harder for them to get housing or jobs. And for non-citizens, putting them directly in the crosshairs for deportation. In addition to ending a key front in the racist War on Drugs, regulating and taxing marijuana would generate hundreds of millions of dollars in revenue for our people and create important agricultural opportunities for our state. In 2018, in a blue state like New York, marijuana shouldn’t even be an issue. If there was more political courage coming out of Albany we would’ve done this a long time ago. The simple truth is for white people the use of marijuana has effectively been legal for a long time. Isn’t it time we legalize it for everybody else?”

Giambra says, “It is time we join with the other states that have moved to legalize marijuana and take advantage of the enormous opportunity we have to raise money to deal with our very serious infrastructure problems, including the subway system in New York City. We don’t need any more studies. We need to act, and act now, for the benefit of the people of the great state we call home.”