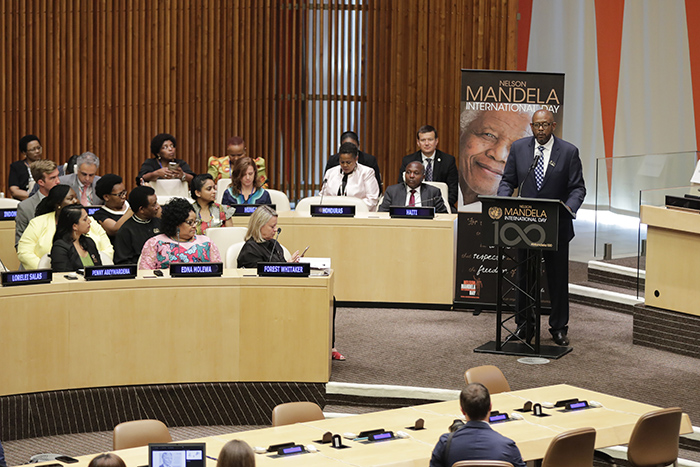 UNITED NATIONS, July 18 — On Nelson Mandela Day at the UN, actor Forest Whitaker told the audience that Mandela “took the path of resistance and paid the price for it.” He compared Mandela to Gandhi and Martin Luther King, calling each a “beacon of courage.”

The UN General Assembly expanded the scope of Nelson Mandela Day “to be also utilized in order to promote humane conditions of imprisonment, to raise awareness about prisoners being a continuous part of society, and to value the work of prison staff as a social service of particular importance.”

In the audience at the UN as in previous years was the New York City Commissioner for International Affairs, Penny Abeywardena, as well as Jerry Matjila, UN Permanent Representative of the Republic of South Africa, set to join the UN Security Council for two years on January 1, 2019.

Many hearkened back to Mandela’s own rousing speeches at the UN, particularly one in 1990 before he was elected as South Africa’s president. On June 22, 1990 Mandela told the UN Special Committee against Apartheid, “It will forever remain an indelible blight on human history that the apartheid crime ever occurred. Future generations will surely ask — what error was made that this system established itself in the wake of the adoption of a Universal Declaration on Human Rights? These questions will arise because when this august body, the United Nations. first discussed the South African question in 1946, it was discussing the issue of racism. They will be posed because the spur to the establishment of this Organisation was the determination of all humanity never again to permit racist theory and practice to dragoon the world into the deathly clutches of war and genocide.”

This was before the rekindling of genocide in Africa’s Great Lakes region, on issue on which Mandela went beyond South Africa’s borders to work on. He continued, “And yet, for all that, a racist tyranny established itself in our country. As they knew would happen, who refused to treat this matter as a quaint historical abberation, this tyranny has claimed its own conclave of victims. It has established its own brutal worth by the number of children it has killed and the orphans , the widows and widowers it can claim as its unique creation. And still it lives on, provoking strange and monstrous debates about the means that its victims are obliged to use to rid themselves of this intolerable scourge, eliciting arguments from those who choose not to act, that to do nothing must be accepted as the very essence of civilized opposition to tyranny.”

Later, after he was elected president, Mandela said in his inaugural address, “The time to build is upon us. We have, at last, achieved our political emancipation. We pledge ourselves to liberate all our people from the continuing bondage of poverty, deprivation, suffering, gender and other discrimination. We succeeded to take our last steps to freedom in conditions of relative peace. We commit ourselves to the construction of a complete, just and lasting peace. We have triumphed in the effort to implant hope in the breasts of the millions of our people. We enter into a covenant that we shall build the society in which all South Africans, both black and white, will be able to walk tall, without any fear in their hearts, assured of their inalienable right to human dignity – a rainbow nation at peace with itself and the world.” That is what the UN itself sometimes claims to be. On Nelson Mandela Day, it was clear how far the UN has to go.