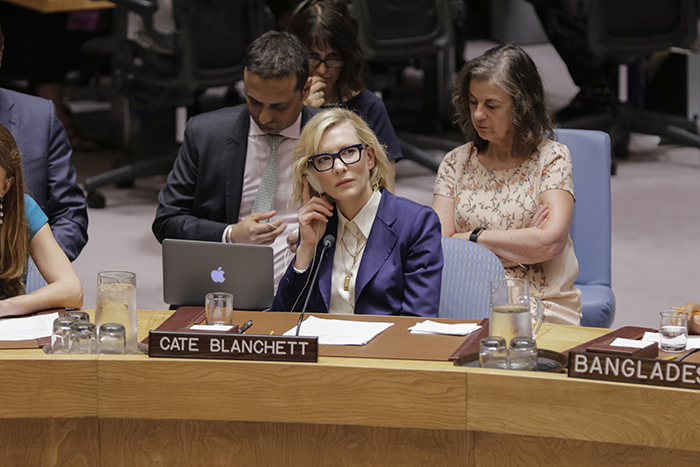 United Nations, New York, USA, August 28, 2018 – Cate Blanchett Academy-award winning actor and Goodwill Ambassador for the United Nations High Commissioner for Refugees (UNHCR), addresses the Security Council meeting on the situation in Myanmar. The meeting commemorates the one-year anniversary of the beginning of the Rohingya crisis in 2017 today at the UN Headquarters in New York City.
Photos: Luiz Rampelotto/EuropaNewswire

Actress and UN refugee agency goodwill ambassador Cate Blanchett told the Security Council today that she saw her own children “in the eyes of every refugee child” she met during her visit to Rohingya refugee settlements in Bangladesh adding that their “experiences will never leave” her.

Blanchett, who visited Cox’s Bazar in March, said nothing could have prepared her for the extent and depth of suffering she witnessed. She reported on stories she heard by victims of torture and abuse, and people whose loved ones had been killed before their eyes; including children who saw their grandparents locked in houses and set alight.

“I am a mother, and I saw my children in the eyes of every refugee child that I met. I saw myself in every parent. How can any mother endure seeing her child thrown into a fire? Their experiences will never leave me. This is why I am immensely grateful that the Security Council – the principle body responsible for international peace and security – is working in unison to resolve this crisis.”

The Goodwill ambassador reminded Council members that the latest wave of massive displacement was not the first endured by the Rohingya population adding that there are more Rohingya living in exile today than in Myanmar itself. She said Bangladesh’s recent response in receiving over 700,000 refugees in a matter of months was one of the most visible and significant gestures of humanity in our time, but much more international support was needed. She said refugees in Cox’s Bazar continued to live in squalid conditions and, with only 33 percent of the refugee operation funded, this was “not surprising; rather it is quite embarrassing.” She added, “Many Bangladeshi villagers living nearby, with little to call their own, have been helping the Rohingya refugees over the past year. If people with so little can step up, why can’t we do better?”

Blanchett said many refugees she spoke with consider Myanmar their home but have real, deep fears about returning there.

“The Rohingya cannot return to the very conditions they were forced to flee. They cannot settle for half solutions. They must know that they belong. A clear pathway to full citizenship is essential. This is not a luxury. This is not a privilege. This is a basic right that all of us here enjoy. A right that the Rohingya do not have.”