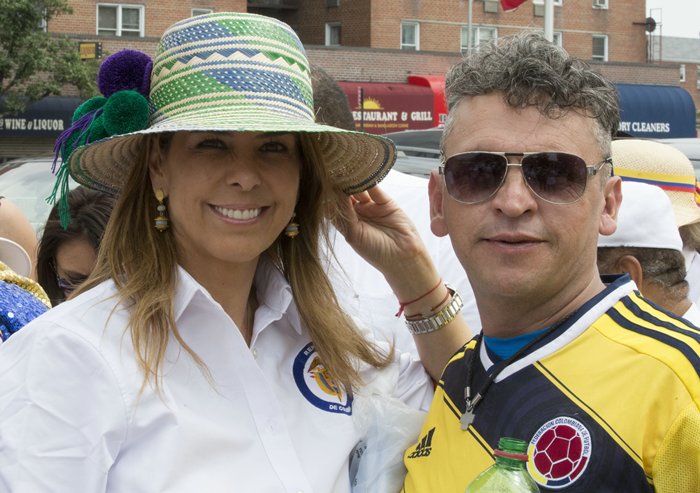 The parade is convened annually to mark the anniversary of Colombia’s Declaration of Independence on July 20th, 1810 which established a junta in Bogota, and paved the way for the nation’s eventual independence from Spain in 1918 and the founding of the Republic of Colombia. While the full history of nation’s political evolution may not be at the fore of everyone’s thoughts while enjoying the sights and sounds of the event, reminders of the Colombian community’s national pride were everywhere. From the ubiquitous Colombian tricolor flag to the wearing of traditional costume by the marchers, the nation’s history took tangible form along the parade route. 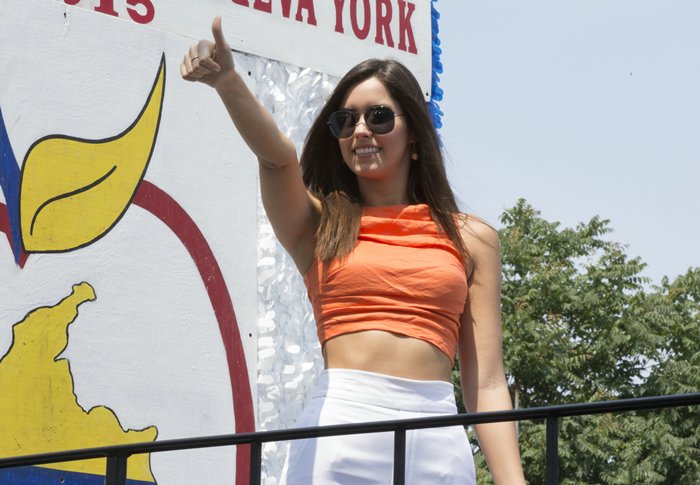 But if the turmoils of Colombia’s hard-won independence left it with little room in its political landscape for kings, “queens” do indeed rule the Colombian heart even to this day. Foremost among these, the star of this year’s parade: the reigning Miss Universe, Paulina Vega. Crowned in 2014 Ms. Vega, a 22-year-old native of Baranquilla, is only the nation’s second winner of the international pageant — the previous title win being in 1958. Ms. Vega’s attendance at the parade follows closely upon her recent appearance at the crowning of this year’s Miss USA winner Olivia Jordan in Baton Rouge, Louisiana earlier this month. 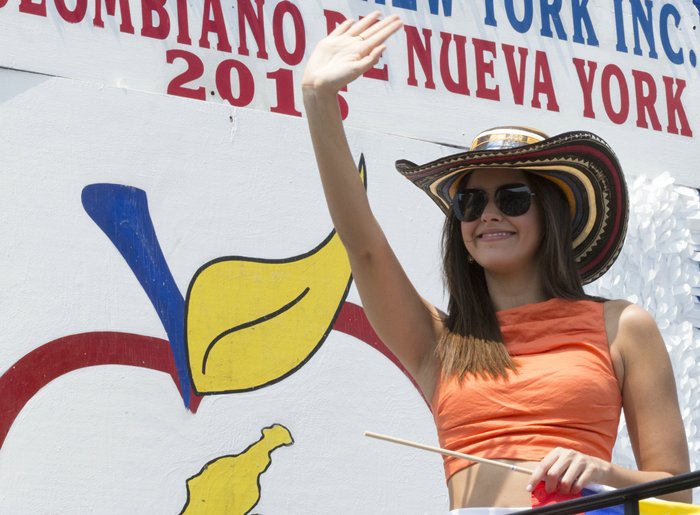 Donning a sunglasses, white pants, a sleeveless top and a Vueltiao (a hat woven from palm leaves and commonplace among farmers from Colombia’s coastal regions), Ms. Vega traversed the parade route atop a float, blowing kisses to the crowd — an embodiment of both the new and the traditional. As a thoroughly modern national celebrity, conversant in four languages and maintaining a packed schedule of appearances throughout the world as Miss Universe, Ms. Vega’s participation in the parade is yet another reminder of how she excels at her role as an ambassador of Colombian heritage.

Ms. Vega, however, was not the only queen at this year’s parade delighting the spectators. This year’s Miss Desfile Colombiano, Sara Milena Florez, and Miss Teen, Maria Joser Lascarro — joined in the festivities. Eschewing any vanity associated with her title and evincing a palpable sense of humility in her role as a representative of the Colombian community in NYC, Ms. Florez said of the parade, “I’m very excited to be here, representing my people and my country. I can’t wait!” Ms. Lascarro, who was born in Colombia but moved to the U.S. when she was about 13, echoed this sentiment at participating in the parade, saying, “I love my country, and I’m really proud of being Colombian… This is the best!” And one could discern that the admiration of these local queens was mutual as the crowd welcomed them along the route.

The parade this year took place on Northern Boulevard between 69th and 87th Streets, passing through the heart of the Jackson Heights neighborhood of Queens. A uniquely fitting location for the parade, Jackson Heights, a long-time enclave of the Colombian community in NYC, is home to one of the largest Colombian populations in the U.S., a fact made immediately apparent by the preponderance of Colombian businesses, many long-established, in the area. This close connection to Colombia that colors daily life in the neighborhood and the NYC Independence Day festivities were noted by Maria Isabel Nieto, the recently appointed Consul General for Columbia in NY. On attending her first NYC parade, she says, “I’ve heard that this is like feeling Colombia in New York. The people get so happy… they feel at home.” And for what else could one hope, if not for a feeling of unity with their fellow Colombians — in their native land and around the globe — as they celebrate this historic day.

Even as the participants and spectators begin recounting their favorite memories from this year’s parade and viewing the photos they might have taken during it, the work for next year’s event will no doubt be beginning. With the massive amount of work behind the planning and execution of an event like the Colombian Independence Day Parade, this year’s dedicated staff is in the meantime hopefully enjoying a moment of well-deserved rest. And with that rest, one can imagine, also, a sense of pride in their labors. As Parade Committee President Rafael Castelar aptly said about this year’s event, “I am happy, and my people are happy too.”