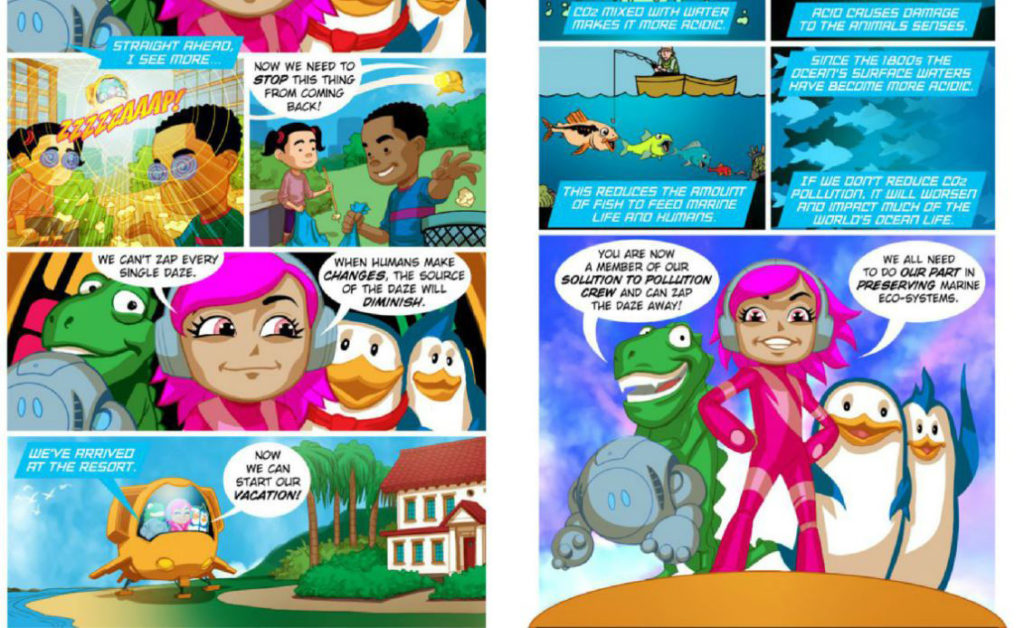 UNITED NATIONS, June 1 2017 –  Annie Sunbeam, an interplanetary superhero, is the main character of the latest comic book from Comics Uniting Nations, an initiative created to promote the Sustainable Development Goals (SDGs) through comics.

The Comics Uniting Nations book Annie Sunbeam and Friends, Protecting Life Below Water promotes SDG #14, which is Life Below Water. The story focuses on damages people do to the oceans and suggests how small changes can make a big difference.

The comic will be launched on 7 June with a panel discussion at the UN Headquarters in New York. From 5 – 9 June, the UN Headquarters will host the United Nations Ocean Conference, a high-level and solutions-focused conference on how to reverse the decline in the health of our oceans for people, planet and prosperity.

Annie Sunbeam was originally created as a TV series by Jill Schneider and Debbie Margolis-Horwitz to educate school children and teach them how to make an impact in everyday life when it comes to environmental protection. The pilot was published online in 2013.

“My creative partner Jill Schneider and I co-created and developed Annie Sunbeam and Friends as a television series to provide eco-friendly content to children several years ago,“ said Margolis-Horwitz.

“A bit ahead of our time, we found that the world was not quite ready for such a bright and brave superhero. We felt that the Annie Sunbeam and Friends Comic would be a great way to bring our eco-friendly content to a global audience via Comics Uniting Nations’ wide distribution platform.“

When Margolis-Horwitz started cooperating with Comics Uniting Nations, the idea for a comic book around her character Annie Sunbeam was born. The comic is illustrated by famous DC Comics artist Bernard Chang, best known for his work on Superman and Wonder Woman.

“I met Natabara Rollosson, Co-Founder of Comics Uniting Nations, at the PVBLIC Foundation’s Media for Social Impact Summit. From there we started a dialogue about donating the IP and content for a comic book. Since then, our team and Natabara along with the UNICEF and PCI Media Impact team have formed a great working relationship,“ said Margolis-Horwitz.

In the comic book, ageless superhero Annie Sunbeam goes on a vacation to Planet Earth and discovers the damages people cause to oceans, rivers and streams. She decides to use superpowers, such as her sunnybeam, to clear human’s minds from the daze which is causing them to harm the environment. As Annie cannot zap every single daze, she finds another way to cure human beings. She urges to make small changes in daily life to prevent ocean pollution.

“My hope is that the important messages delivered through the story and artwork register with our audience of children, parents and educators. Encouraging them all to become real change makers and join Annie’s Solution to Pollution Crew by adjusting their day to day activity to prevent further damage to our oceans.“

Comics Uniting Nations, a partnership of UNICEF, The World’s Largest Lesson and NGOs PCI Media Impact and Reading with Pictures, creates comic books for children and adults to promote the seventeen Global Goals.

As a universal language, visuals have the power to transport a message in a way that it can be understood everywhere. Comics Uniting Nations helps achieving the SDGs by making them more accessible. So far, the initiative has published eleven comics, most of them promoting environmental protection.