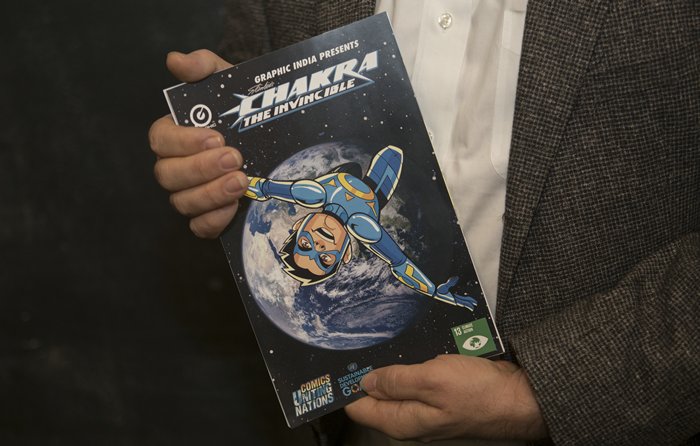 United Nations, New York, USA, December 04 2015 – Sean Southey, CEO of PCI Media Impact on an exclusive pre-release press encounter at UNHQ in New York on the launch of the 3rd of 17 comics in the the Comics Uniting Nations initiative with UNICEF and Graphic India. The comic will release next week in Paris at the UNFCCC COP21. Photos by: Luiz Rampelotto/EuropaNewswire

NEW YORK, 6 December 2015 – Being a superhero is not always enough. Or so claim Chakra the Invincible and Mighty Girl. Comic book fans may be familiar with “Comics Uniting Nations” – an initiative developed by UN/UNICEF, NGOs PCI Media Impact and Reading With Pictures, creative talents, publishers and distributors from all over the world to raise awareness on the 17 global goals for sustainable development through the art of comics. Well, the saga continues and the challenges get bigger.

After getting to meet the team of “Heroes for Change” who come to the rescue of the world, promoting conditions ranging from food security to justice for all (the 2030 agenda), readers got to explore the issue of gender equality through the body switching story of Chakra the Invincible and his neighbor, Mighty Girl. The well-known character created by Stan Lee and Sharad Devarajan and his new friend take the readers to a new journey. One in which they face a challenge they can’t win themselves.

“In this comic, Chakra and Mighty Girl meet a group of students attending a model UN conference. When it starts, all the young people involved realize that their countries are suffering from the challenges of climate change in different ways. In Indonesia, there are fires, created by the burning of forests to create palm oil plantations – it’s affecting health, asthma and the wellbeing of children. In the Philippines, climate change events are hurting everyday people with typhoons and hurricanes. Chakra and Mighty Girl realize they can do something to help”, Sean Southey, the Chief Executive Officer of PCI Media Impact announces to Europanewswire.

“Chakra and Mighty Girl travel across the world and harness the power of the hurricane to put out the forest fires of Indonesia. But when they return, they realize even as superheroes they cannot take on the issue of climate change. It takes every single person on the planet to help fight climate change. And Mighty Girl and Chakra the invincible call on everyone at the model UN conference in Mumbai, India, to do they little bit to help climate change”. 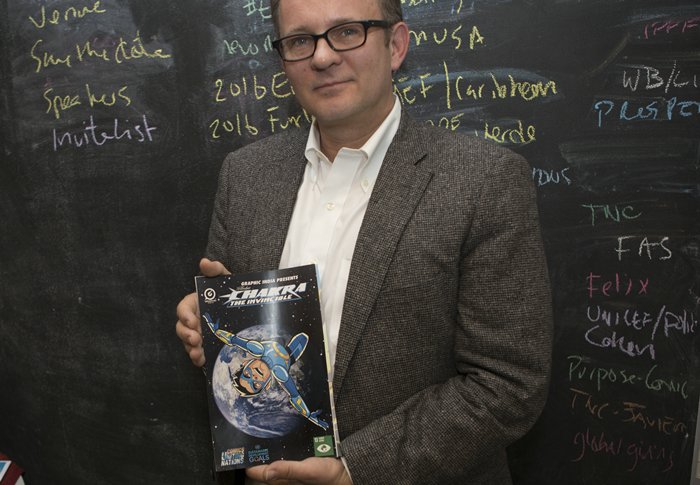 How? The two have the solution. After explaining where climate change is coming from and its actual ramifications, the comic book puts forward a number of individual things that everyday people can do. These include the “micro-behaviours of riding a bicycle, taking a bus or train, only using sustainably harvest palm oil, and encouraging your government to do something about climate change”, continues Southey, stressing that the book, like the others of the series “is really about changing individual behaviors”. Especially of young people.

Meanwhile in Paris, the UN Climate Change conference (COP21) is ongoing. Heads of State and government are meeting and discussing to find a green agreement, with the aim of keeping global warming below 2°C. If Chakra the Invisible and Mighty Girl can’t combat climate change alone, maybe their call and power will have an impact on the world leaders in the French capital. In fact, the launch of the book – and the new website www.comicsunitingnations.org – will officially take place next week, prior to the closing of the conference on December 11 in Le Bourget, where the talks are being held.

“We think it’s critical this book is been released during COP21. The issues of Climate Change are complicated, particularly to young people. Comics allow us to enter into an issue in a simple, fun and compelling way and allow us to generate the type of discussion that will involve young people who historically have been left out of the discussions”, added the head of the ECOSOC register non for profit PCI Media Impact. “Likewise, this comic is not about one country, it mentions two or three, but they’re just examples. Not just the Philippines, but from the U.S. to Peru, from Mongolia to Madagascar the world is suffering from the impacts of climate change”.

The goal therefore is too reach young people everywhere – a potential comics have in their own, universal nature. “We are very excited to work with our partners Graphic India and the Here Now campaign to create this comic on climate change, and are proud of our collaboration with UNICEF who can take a good comic and help disseminate it in over 140+ countries around the world: good content is way more interesting with great distribution”, underscores Southey.

In a world that is ever more digital, new channels of communication amplify the message. Coming Uniting Nations has already got 6,000 followers on Facebook since the beginning of the campaign three months ago and “Heroes for Change” (the first book of the series) has got over 120,000 downloads. “It means that young people and teachers have opened this content and talked about it”, underlines Southey: “This is the type of distribution and scale we need to take on the incredibly important issue of climate change”.