NEW YORK – World leaders preparing to meet in Paris from November 30 to December 11, 2015 to reach a binding agreement on climate change should know that superheroes will join the conversation as well. During the days of the COP21, in fact, a new comic book on the issue will be launched as part of “Comics Uniting Nations”, a series aiming to raise awareness on the Sustainable Development Goals (SDGs) through the art of comics.

Comics Uniting Nations will produce 18 stand-alone books: an introductory volume and 17 story-driven comics, one for each goal of the 2030 agenda, and well a single page comic for each SDG. While the introductory comic and the first story-driven book on the SDGs – the one on gender equality, featuring Chakra the Invincible, a character originally created by comic book legend Stan Lee – were released from the stage of the 2015 New York Comic Con, the next few books are already in production. In addition to the one on climate change, a hunger book is on its way, along with 17 one-page comics. And, it seems, discussions are ongoing on the possibility to use adaptations of major comic characters.

So what’s to be expected? But also, how did this project come to be? Europanewswire interviewed Sean Southey, who served for 12 years in the United Nations Development Programme and is the current Chief Executive Officer of PCI Media Impact: a 30-year-old not-for profit organization that is “a pioneer and world leader in Entertainment-Education and communications for social change,” according to their website. Comics Uniting Nations is a PCI Media Impact and UN/UNICEF initiative, realized in partnership with comic books and literacy nonprofit Reading with Pictures, and bringing together publishers, distributors and creative talent from all over the world.

What’s the role of art in shaping minds and how did this process start?

“We at PCI Media Impact believe that a powerful story can change the world. So when the SGDs rolled out, we wanted to help and we said, how can we best reach everyday people with the important message of the sustainable development goals? We thought, we could do TV shows, but they would be too expensive to broadcast in 160 countries. Could we produce radio dramas? Given that some countries would require several languages, this would mean too much content. So we thought, what is the simplest, most elegant way to reach 10s of millions, if not billions, of people? And we landed on comic books.”

Why? What makes them more effective for this initiative than other means of communication?

“Because comic books are one of the most popular media of our age. Many of the recent highest funded movies were based on comic books: the Avengers, Batman, Captain America, Spider Man — films people love. Over 80 million people in the US self-identify as comic fans on Facebook. That means they each had to check a box that says ‘I love comics’! And of course the hardest and most crucial generation to reach with the SDGs is young people. And young people happen to be a major target audience for the comic industry, along with fans of all ages who love superheroes. So, we thought, let’s tap into that demographic while partnering with the number one UN group that deals with young people – UNICEF.” 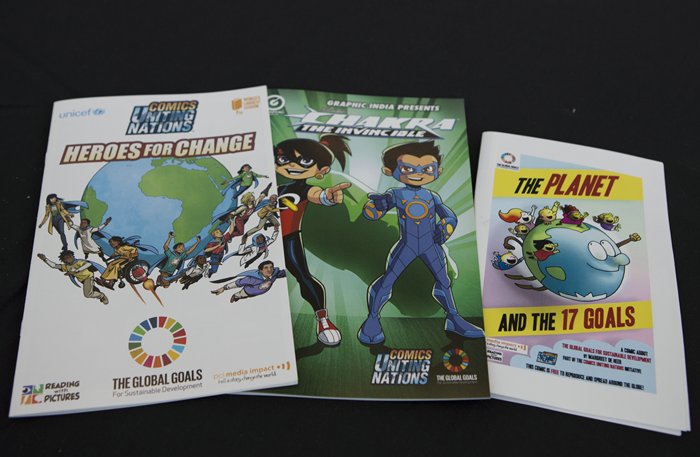 So you proposed to UNICEF and The World’s Largest Lesson?

What audience did you reach first?

“The introductory comic went to 160 countries; over 104 national Ministries of Education signed up. In fact, over 10 national Ministers of Education around the world launched this initiative right after the announcement of the SDGs in September, School children were a perfect initial audience for the comics, since visual storytelling is a powerful educational tool that is not always used to its full potential in classrooms.”

From the introductory book to a series of 17…

“We thought the introductory comic wasn’t enough. We needed to do a comic on gender, on climate change, on equality, on water and sanitation, on the environmental goals; so we started seeking the partners we need. We have already created Chakra the Invincible with the wonderful group called “Graphic India”, the number one comic production house in India. They donated a comic based on Chakra and created a whole new character, Mighty Girl — it’s a wonderful body switching story which helps millions of children around the world understand that the everyday reality of a girl is different in many countries than the everyday reality of a boy. And the story gets people talking about the issue.”

Is this enough to make a campaign successful?

“Good content is to drive good conversation. Good conversation is what inspires behavior change and shifts social norms. These comics are compelling stories, and we believe they will provoke the discussions needed”

What will the new productions be addressing and when will they be released?

“We now have a climate change comic in production, to be rolled out at COP21 in Paris during the climate change convention. We have a hunger comic underway. Then we have individual, one-page comics. We already have one for each goal, but we know one each is not enough, because due to different cultures, different comics will work in different places.” 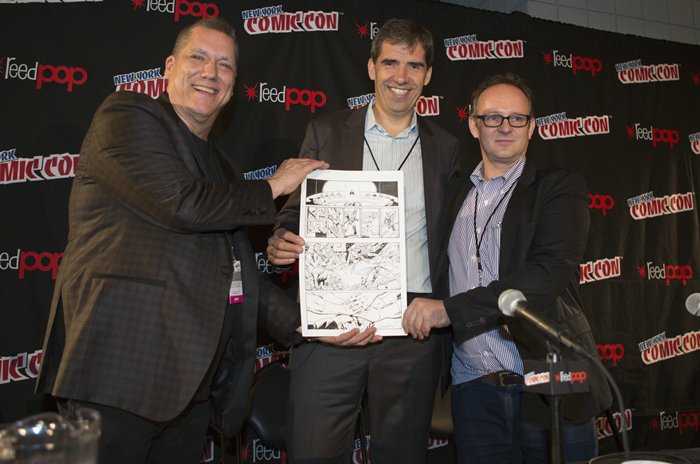 “We will keep partnering with UNICEF until we have all 18 comic books done (the introductory and one for each of the 17 goals). The introductory one is already translated into 18 languages, including Icelandic and Welsh; it’s currently being translated into Montenegrin. Then, there’s much more to do. Where are looking for new friends, new partners, new distribution mechanisms to share the story.”

The initiative benefits from well-respected talent, such as Stan Lee.

“The quality of people that have come to bear is one of the things we are most excited about. The Secretary General himself launched Comics United Nations with a video that shows the humor, lightness and thoughtfulness on the part of the UN. But also the involvement of industry stars like Stan Lee, the creator of modern comics — half of the characters we know, if not two thirds, come from him. Our second comic, the one on gender called Chakra the Invincible, was co-created with Stan Lee. He will continue to work with us and we unfold the full series.”

What about the choice of the characters and their relation to the SGDs?

“It is important to use characters, whether famous or relatively unknown, that people can relate to and connect with. This is what will help the initiative to reach the target population effectively. Just imagine, for a second, if we had Iron Man talking about climate change and clean energy. If we had Olaf, the snowman from Frozen, talking about climate change. If we had Snoopy, Asterix — these are characters everyone knows. We are working to get these people share their stories and brands to advance the important issues represented in the SDGs.”