United Nations, New York, USA, January 22 2016 – Juan Somavia, former President of ECOSOC, speaks at a special event to commemorate the 70th Anniversary of the Economic and Social Council today at the UN Headquarters in New York. Photo by: Luiz Rampelotto/EuropaNewswire

2016. The UN organ established under the United Nations Charter in 1945, became operative the following

year. In the seven decades since its creation, it has committed to remove the root causes of war,

degradation, as well as socio-economic gap between all people. “We have a rich history in ECOSOC, but the

bar has been raised”, Council’s President Oh Joon commented during a the commemoration held at UN

Headquarters in New York on Friday. He also stressed the results so far achieved the body, including

pushing forward with the sustainable development goals, the “2030-agenda”.

One of the six principal organs of the United Nations, the Economic and Social Council (ECOSOC)’s mandate

since its origin was to offer direction to, and provide coordination of, the economic, social, and cultural

activities of the United Nations, with responsibility for advancing international economic and social

The first meeting of the Council was convened from 23 January to 18 February 1946, in London, UK.

Ramaswami Mudaliar of India served as its first President. On January 12 and 14, 1946, the General

Assembly had elected 18 members of the Council, which later increased, comprising 26 members (1965) to

its current 54 members (1974). Membership is based on geographic representation.

But its doors are also open to engage the civil society, and currently more than 4,000 NGOs, ranging from

Business/Professional Women, signed up to help ECOSOC achieve its mandate. This includes: “promotion

of:  higher standards of living, full employment, and conditions of economic and social progress and

cultural and educational cooperation; universal respect for, and observance of, human rights and

fundamental freedoms for all without distinction as to race, sex, language, or religion”.

expectations for transforming the world for the benefit of mankind,” Council’s President Oh Joon declared,

Member States and the coordination of development action by the UN system”.

“Seventy years on, the United Nations achieved another significant milestone by adopting the 2030 Agenda

for Sustainable Development in September last year,” he continued, calling it “the reflection of a

aftermath of World War II. I believe that the work of this Council has been pivotal to that evolution”.

Among the “milestones” achieved since its establishment, the UN Economic and Social Council can count

all forms of discrimination against women in 1979 for the promotion of human rights of women. An

Programme on HIV/AIDS. Launched in 1996, it leads the global response to fighting HIV/AIDS, tuberculosis

and malaria. It works with partners from many sectors of society and, includes associations of people living

with HIV/AIDS in its governance and programmes, which is something unique for an international

To supporting countries transition from conflict to peace and development, in 2002, ECOSOC launched Ad

Hoc Advisory Groups on African Countries Emerging from Conflict, which contributed to calls for the

creation of the Peacebuilding Commission in 2006, which also recently celebrated its 10th anniversary.

In 2012 the first ECOSOC Youth Forum was held. It became an annual platform for youth to engage in

dialogue with Member States and contribute to policy formulation on global economic, social and

environmental issues. This year, it will take place on February 1-2. At the heart of the discussion, there will

be the role youth can play for the implementation of the 2030 Agenda for Sustainable Development, and

how to communicate its goals, using social media and communication tools. 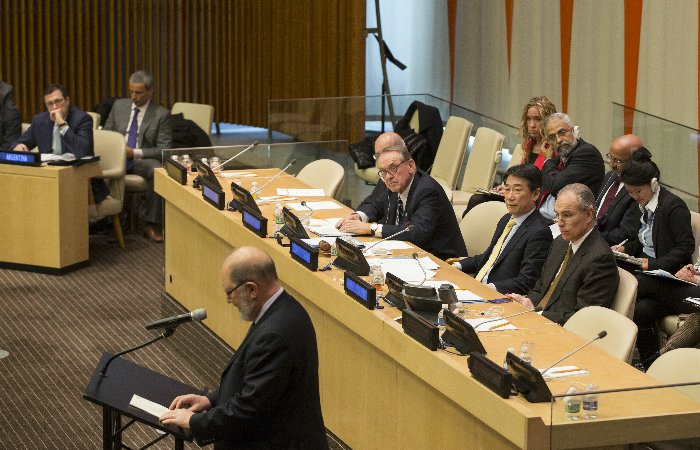 While such instruments are in place, the world still witnesses conflicts, inequalities, discrimination and

officials and delegates attending the event on Friday of the challenges ahead. He used the ECOSOC

chamber as a metaphor of the organ’s work: “It was designed by my fellow countryman, Sven Markelius. In

creating this beautiful room, there appears to be a flaw: part of the ceiling is unfinished. This serves as a

fitting reminder that the work of ECOSOC will continue to be needed across the world.”