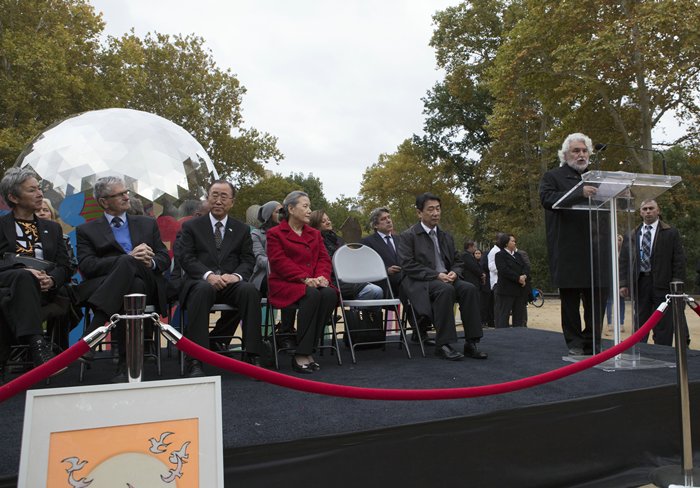 Gabarrón reveiles his sculpture “Enlightened Universe” in Central Park. Ban Ki-moon: “a masterpiece to show how we create a more inclusive world”

NEW YORK, OCTOBER 25 2015 – On October 24, 2015, while symbolic landmarks and landscapes worldwide where going UN Blue, lighting the Earth up to celebrate the 70th anniversary of the United Nations, an artistic unveiling took place in as iconic Central Park, specifically at Rumsey Playfield, at 4:30 pm.

Spanish painter and sculptor Cristobal Gabarrón introduced to New Yorkers as well as tourists from across the globe his latest work of art, “Enlightened Universe”. A creation that comprises the themes of the Earth, respect for nature, for the other, for any differences that make each one a unique individual, but also solidarity, cooperation and human dignity. In other words, said the artist to Europanewswire, “the values the United Nations has been aiming at defending in its 70 years of life”.

And in fact, the presentation of the sculpture, which is a gift from the author and his foundation to the international organization, was also attended by UN Secretary-General Ban Ki-moon and the President of the 70th session of the UN General Assembly, Mogens Lykketoft. They both expressed gratitude to the artist for his work and its ability to help reach a bigger audience, while conveying fundamental issues in a way that is both immediate and demanding. 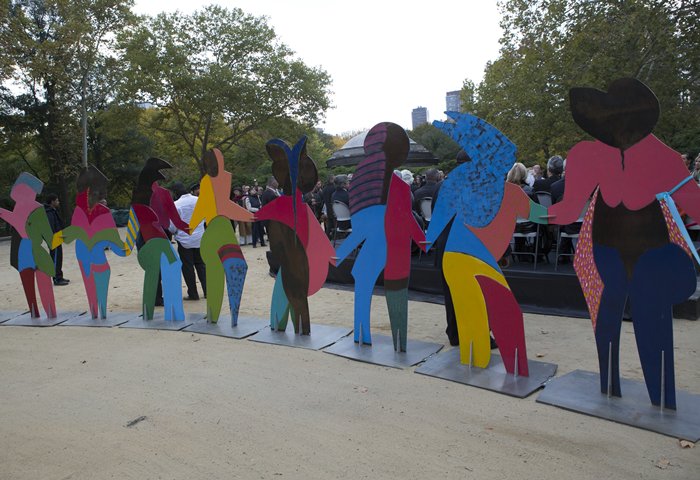 “Enlightened Universe” is formed by a sphere and surrounded by a spiral of 70 human figures – each one representing people of different ethnicity and culture as well as one year of the UN. Such figures join hands forming a human chain, a “solidarity chain” – as the sculptor defined it – and creating a concentric circle. Geometry is not irrelevant in Gabarrón’s works. The forms used are emblems by definition. The sphere has a powerful meaning: “It is an element symbol of perfection that embodies the center where dwells the core, radiating the force that nourishes and moves the Universe”, explained Gabarrón. In there, opposites live and coexist, creating life energy. “The concept of ‹‹infinity››, of ‹‹eternal motion›› is almost a constant in this artist´s work, who develops the icon of the spherical, the circular, even the spiral, in an iconographic vision of ‹‹life in multiple directions›› – essential theme in many of his series”, it is examined on his website.

The sculpture’s central sphere and its diameter of 6,371 millimeters are a tribute to the Earth, whose average radius measures 6,371 kilometres. The 70 figures form a universal chain of the human values defended by the UN – freedom, equality, solidarity, tolerance, respect for nature, shared responsibility, education and culture.

“This structure behind us depicts the great hope that all of us have invested in the United Nations. The 70 figures surrounding the globe represent the 7.3 billion humans living on Earth today. Their hands are joined in solidarity, to show how we create a more inclusive world. A world in where we have shared values and a shared responsibility to protect our planet,” said in his remark UN Secretary General Ban Ki-moon, who also thanked Gabarrón “for creating this masterpiece and for doing so on his own initiative. His artistic talent is only matched by the generosity of his spirit and his Foundation”

Following the head of the United Nations comments on UN DAY 2015 – “For seven decades, the United Nations has served as a beacon of hope for people the world over… I hope you will leave believing that a better future is within reach” – General Assembly President Lykketoft recalled the principle of the UN founding document: “We who are here tonight have a strong commitment to contribute further to the ideals of the UN Charter about peace, development and respect for human rights. We must work to end the senseless conflicts and violence that disrupt development, displace millions and destroy hundreds of thousands of lives”. According to him, “this colorful and imaginative art work will serve to inspire and remind visitors to New York that billions of people around the world dream of enjoying peaceful and prosperous lives in a sustainable and just world.”

“Enlightened Universe”, as the newest addition to Central Park’s sculpture program, will remain in the venue (Rumsey Playfield, entrance near East 72nd and 5th Avenue) until 15 November, after which it will be displayed in major cities across the globe, in order to keep raising awareness for freedom and equality. Its interactive nature is also a vehicle of such intention – it is a call to viewers to get involved. They can walk through the passageway of figures, pose with them or hold hands with the chain. Visitor’s reactions with images or writings can be exposed inside the installation or online, being sent from home through the specific app. The drawings sent online will be selected by a team of volunteers and posted on the website.