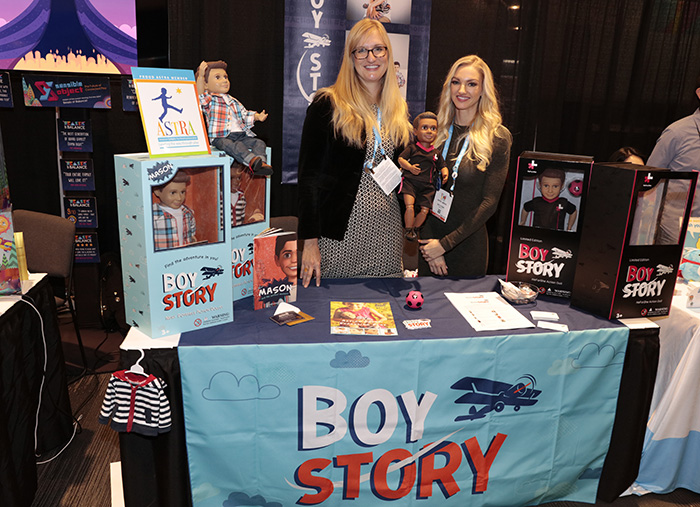 equality from an early childhood stage.

“Emotional intelligence is a very important skill that many parents are focused on right now,

because we’ve seen that especially boys when they grow up are lacking in those skills,“ Kristen

In the past, most doll makers only offered girl lines. Boy Story fills in a gap and strives to remove

the gender stigma which is attached to the doll play. The benefits of imaginative pretend play which

comes along with playing with dolls should be available to boys and girls alike.

“Our dolls are called Action Dolls,“ said Johnson. “It is a kind of a hybrid of a traditional 18-inch- doll

like the American girl dolls and an action figure which has joints. And so we added the joints to

emphasize the movement aspect of the dolls.“

Kristen Jarvis Johnson, a lawyer and mother of two boys, had the idea to develop a boy doll that

would bring children more diversity when it comes to toys. Together with her sister Katie Johnson,

she launched Boy Story LLC in 2016. They successfully raised money with help of the platform

Kickstarter and developed an Equality Line, a special edition of dolls co-created in partnership with

been aware of and followed HeForShe since they started,“ said Johnson. “And then I circled back

to progress gender equality for women and girls. HeForShe was launched in 2014, when British

playing with dolls than they have in the past,“ said Johnson.

Boy Story’s aim is to ensure diversity and offer more choice in play, giving children a new toy that

they did not have access to in the past. In her classroom studies, Johnson found that children do

not care as much about boundaries such as gender as adults do.

“In a way, we’re moving the gender from the play by giving children dolls that are both boy and girl

dolls,“ said Johnson. “It’s fine for anyone to play with a doll, it’s just a type of play and just

encouraging them to play without having the gender stigma attached to that play.“

Boy Story believes that toys and play prepare children for the future. While in the United States a

rising number of dads spend time playing with their children, the boy dolls might help them educate

their kids through playing with dolls.

“imaginative play as a vital component to the normal development of a child“.

According to various studies cited by Kaufman, pretend play enhances the development of language usage, the

awareness of others and expression of emotions.

Johnson also referred to The Representation Project’s documentary The Mask You Live In. This

documentary unveils a society of hyper-masculinity, where boys lack emotional intelligence and

“There is so much pressure [on boys] to be this hyper-masculine figure,“ said Johnson. “What we

pretend play … and so what we’re trying to do is help normalize doll play for boys.“

“We’re emphasizing the play and the learning behind that activity, which is using your imagination,

Boy Story presents its Action Dolls at the New York Toy Fair 2017. The fair is held at the Javits

Convention Center from 18 to 21 February. The dolls are available from 99 dollars on upwards.