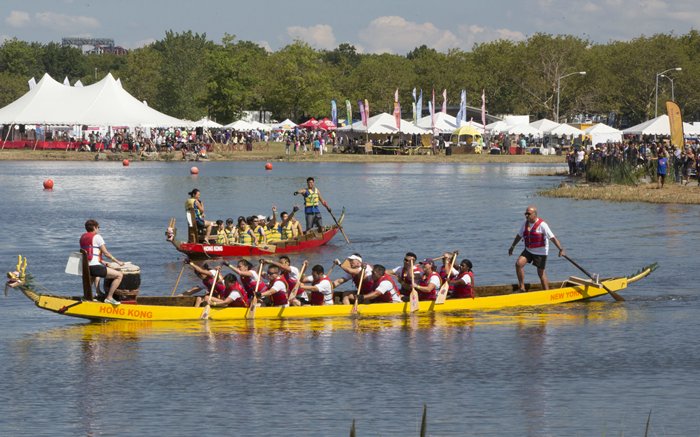 FLUSHING MEADOWS-CORONA PARK (QUEENS), New York, July 9 2015 — (by Albin Lohr-Jones) – Alligators in the sewers? Perhaps not. But dragons were plentiful at the 2015 Hong Kong Dragon Boat Races in Queens. From the dragon dancers weaving through the crowd at the festival to the elaborately-carved “head” adorning each of the boats, the ancient Eastern symbol of prosperity and good fortune caught the eye at every turn. The NYC version of the popular summertime festival, celebrated annually across the globe, featured food, musical performances, dance and — of course — boat racing. Now in its twenty-fifth year as a NYC event, the event drew thousands of spectators to Flushing Meadows-Corona Park in central Queens, where the racers took to Meadow Lake, competing in 250- and 500-meter races, while spectators watched from the shore.

Originating, as legend tells, in the 3rd Century B.C.E. with the drowning death of famed poet Qu Yuan, the event started as an annual re-enactment to rescue his body from the Miluo River. Braving the river’s currents and racing to recover Qu Yuan’s body from being devoured by fish, fishermen who witnessed the event manned their boats, took to the water and sounded drums to ward off evil spirits as they raced to save him. Though unsuccessful, their efforts are immortalized by the races held now throughout Asia.

While much has changed since Qu Yuan’s era, many of the traditions associated with dragon boat racing still persist. Most apparent, the boat itself — its design, length, crew, and style of paddling — conform to the millennia-old standards used throughout the dragon boat racing world even today. In the newer (and much lighter!) fiberglass boats used by many of the teams at the NYC event, every crew consisted of single-oar paddlers seated two-per-bench, a crew member steering the vessel in the aft, and a crew member seated at a single drum in the bow of the boat. The regular drum beat is used to dictate the rate of rowing to the paddlers, and is sounded throughout the race. For the more traditionally-inclined, the Queens dragon boat races also feature a number of “heritage” events, where crews man some of the massive carved teak dragon boats on hand, each weighing upward of one ton! 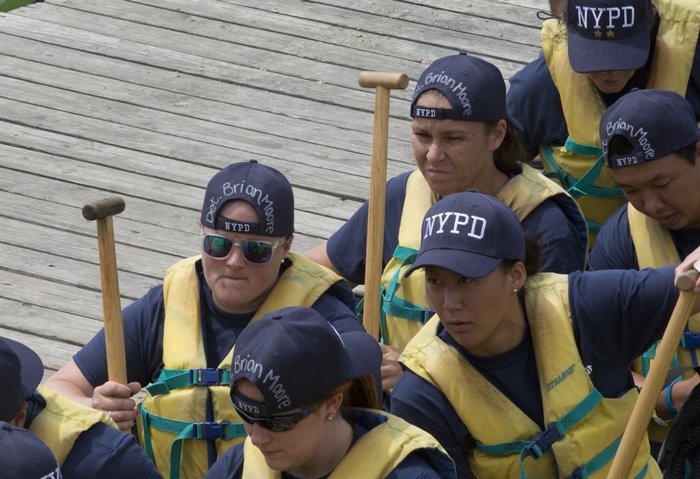 Yet, if a singular hallmark of tradition from Qu Yuan’s era holds sway over the event, it is the importance of the festival as a commemoration, honoring those who have died. This was especially and poignantly embodied at this year’s festival by racing crews from the New York Police Department. Racing under the name “NYPD Dragon Boat,” the team manned three boats, one raced in honor of each of three NYPD officers killed in the line of duty since last year’s races: Officers Brian Moore, Wenjian Liu, and Rafael Ramos. The NYPD team has participated in the event since 2011, though, according to Assistant Chief Diana Pizutti, Commanding Officer of Queens North Patrol Borough, founder of the team and a participant as a paddler, this is both the first year they have raced in memory of fallen colleagues and the first year that their team is co-ed (only women raced with the team during its first four years). 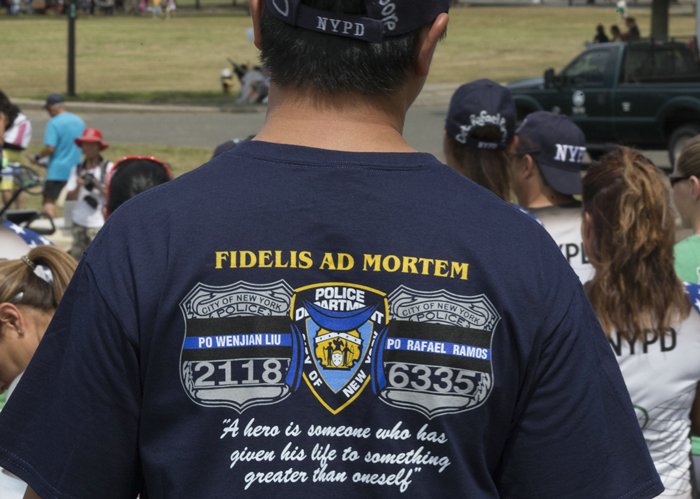 For those at the festival not participating in the races — or lucky enough to find a viewing space along the lake’s shore — other amusements abounded. From performances by a traditional Chinese music ensemble in the early morning to a dance/magic act in the afternoon, the festival’s main stage offered ample inland entertainment. Food vendors of all types provided refreshments, and numerous area businesses — many of them sponsors of the festival — put themselves on display at information tents around the park.

Though the Hong Kong Dragon Boat Festival in NYC took place on the Hudson River for its first two years, it has since found a fitting venue in Flushing Meadows-Corona Park. Home to one of the largest Asian immigrant populations in the world, Flushing boasts a venerable history as an enclave of that community. Numerous politicians and city officials attended the festival’s opening ceremonies, acknowledging their appreciation for the event and support for the Chinese community, including Queens Borough President Melinda Katz, NY State Senator Toby Stavisky, Former NYC Comptroller John Liu and NYC Public Advocate Letitia James. Before presenting Hong Kong Dragon Boat Race Committee Chairman Henry Wan with a framed proclamation from her office, James succinctly captured the spirit of the festival, saying, “Today we’re going to again celebrate our diversity! And it’s absolutely wonderful that an African-American woman, who’s speaking Cantonese, who comes from Brooklyn but is speaking in Queens, who represents the City of New York is here to celebrate this wonderful festival! That’s what’s so beautiful about New York City!”