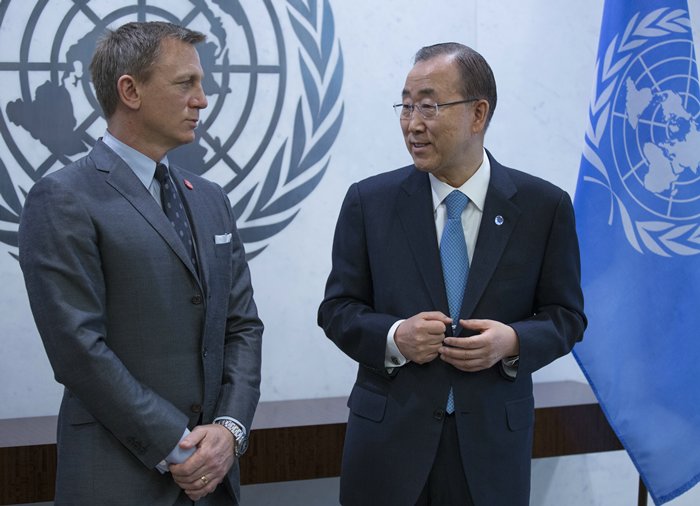 In a brief ceremony held at UN Headquarters, the Secretary-General thanked Mr. Craig for his commitment to support the UN’s vision of a world free from the threat of landmines and explosive remnants of war.

Ban said, “You have been given license to kill. I’m now giving you license to save.”
The designation marked the 10th anniversary of the International Day for Mine Awareness and Assistance in Mine Action. Ban said he hoped Craig would raise public awareness about UN mine action efforts, visit mine action programmes worldwide, and assist in raising political and financial support.

“The briefing from the Secretary-General, and from all of the United Nations staff I have met, demonstrated the enormity of the task,” he said. “The use of improvised explosive devices in Iraq, Somalia and Mali; the widespread use of ‘barrel bombs’ in Syria, and the landmine contamination in Cambodia, Colombia and Afghanistan must all be addressed simultaneously. It is a big job. The United Nations needs political and financial support to succeed.”

Designation as UN Global Advocate for the Elimination of Mines and Explosive Hazards applies for three years.  Craig has already done work for the UN Mine Action Service (UNMAS), narrating two videos for the office in 2014.