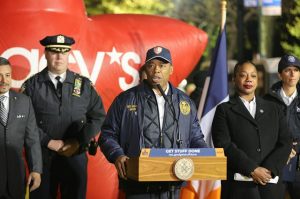 Mayor Eric Adams: Thank you. Thank you. Thank you so much. And I have on a Macy’s purchased shirt, giving my business to one of my favorite stores in the city. And all of you who are out there, if you are tourists, we want you to do one thing, spend money. Spend a lot of money. Make sure you do a lot of shopping. And listen, really thanks to Macy’s — 96 years. I remember as a child watching this parade. Not only is it the kickoff of our shopping season, but it’s also the kickoff of what I believe is one of the most important holidays we have. We sometimes get it mixed up. It’s Thanksgiving, not thanks-receiving. So find a way to give, find a way to just share your joy. And we have an obligation, the police commissioner and I and our amazing team, to make sure you have a safe holiday season.

I’m joined by some of my senior team members. The streets are going to be closed in certain areas. Amazing commissioner from DOT, Ydanis Rodriguez. Also, we’re joined also by one of my commissioners, Dan Garodnick. Dan is somewhere around as well. And give a special, special thank you and a warm hand of applause to a public servant. This is his last parade as the head of our patrol force, chief of department… Chief of Department Ken Corey is retiring. We want to thank him for over 30-something years of protecting the people of this city. We are blessed because of him. And this parade is not only about these festivities, but it’s about tourism. 56 million tourists will visit this city this year. It’s predicted that we will have 65 million next year. We are one of the top destinations in the country.

And when we see the inflation of the balloons, that’s the only inflation we like. We don’t like inflation of spending money, it’s costing too much. But we are going to focus on the celebration of the parade. When this parade and the balloons lift off, it’s a signal that our city is lifting off. This is an amazing city with the resiliency and the energy and the purpose and the prosperity. It’s about enjoying the happiness of this city. So many of the families that are coming from around the globe, they come to celebrate this amazing parade, and we are looking forward to the joy that’s going to be celebrated tomorrow. Macy’s Thanksgiving Parade marks the launch of our holiday season with Santa Claus in the parade, and starts the wonderful holiday season of this time of the year and we’re looking forward to it. So to the millions who come to see the lights, experience the joy of this magical city, we make the importance of coming out today with the commissioner to talk about how we’re going to ensure you can enjoy this parade in a safe way.

It starts with the balloons behind me. I learned today it takes about 90 minutes to blow up a balloon and it’s just unbelievable when you see them moving throughout our city. No wind issues. So we are going to get to see the full compliments of balloons that many years sometimes we have to deal with the wind. This year we’re celebrating a new visitor from down under, Bluey the blue heeler. Looking forward to that. And we are keeping our eye out for the mischief, which is because of those such as Stuart the Minion. He loves bananas and I’m glad to see he’s enjoying fruits, because I’m a vegan, so I like some good fruits. So we’re glad to see that. We’re also welcoming back characters including astronaut Snoopy, my favorite. Snoopy is the favorite. He’s flying, the astronaut is flying as usual, and the favorite Baby Yoda. He’s bringing the force with him as well.

And also want to acknowledge all the volunteers as it was indicated. When you think about the volunteers that come out, the various city employees, and we do a lot of press conferences — commissioner, I never see this many cameras. These guys, they love the parade also. Everyone is here just to bring the joy and showing the whole world. So thank you all. Let’s have a safe parade and give really a thank you as you walk past members of the DSNY, DOT, law enforcement, FDNY, everyone that comes out to make sure you could enjoy this parade. We have some amazing city employees. They work during the holidays to make sure that you can be with your friends and families during the holidays. And I appreciate them every day. Let’s continue to lift them up as they do their job. Thank you so much. I want to turn it over to our amazing police commissioner, Police Commissioner Keechant Sewell.

Police Commissioner Keechant Sewell: Thank you, Mr. Mayor. Good evening everyone, and thank you for being here. The women and men of the NYPD urge everyone to come out to enjoy what is without a doubt New York City’s greatest family tradition. Between the balloon inflation today and the annual Thanksgiving Day Parade tomorrow, we absolutely love to police these events. I want to thank Macy’s for being such receptive and safety conscious partners every single year. At this time, I will tell you there are no credible or specific threats to New York City, to the Thanksgiving Day holiday or any of the surrounding events.

Shortly, I’m going to turn it over to our chief of counterterrorism, Martine Materasso, who’s going to go over some more information about our preparedness for this event. I want to thank our civilians and uniformed officers in the NYPD for what they do every single day, particularly now around the holidays when they are away from their own families. Members of the NYPD work diligently so that everyone who lives in, works in and visits this city can enjoy events like this and feel safe in this city. This is our unwavering focus. We know that all throughout the holiday season, millions of people will be coming to New York City, and we want them to know that the greatest Police Department in the world is supporting them. Happy Thanksgiving. I’m thankful for our supporters, our New Yorkers, our visitors who are here with us today. I hope you all enjoy the holiday. Chief Materasso.

Martine Materasso, Chief of Counterterrorism, Police Department: Thank you, commissioner. Good evening. As stated, no current threat reporting indicates any active, credible, or specific threat at this time to the Macy’s 96 parade. In light of recent events, specifically the shooting in the nightclub in Colorado Springs and the arrest of two individuals for posting threatening statements online to Jewish targets, the Counterterrorism Bureau will deploy additional resources to ensure the festivities across the city are safe for all. Expect to see additional counterterrorism officers throughout the holiday season at venues that attract crowds, such as nightlife locations, holiday markets, religious institutions, shopping centers, and the Rockefeller Center tree. The Macy’s Thanksgiving Day Parade, as said, is going to be about a three hour event, beginning at 77th, ending at 34th Street. And as said, the weather should not interfere with the balloon. So that’s great news for all of us.

Please follow NYPD News for street closures as well as pedestrian crossings before, during, and after the event. We will deploy our full cadre of counterterrorism assets, including but not limited to heavy weapons teams, explosive detection canines, our bomb squad, radiological and chemical sensors, counter surveillance teams, drone detection and mitigation, sand trucks and blocker vehicles, and additional cameras have been installed along the parade route. We would also like to thank Macy’s for this continued partnership to make this event as seamless as possible. We will continue to work with the Intelligence Bureau, our federal, state, and local partners and we have all put a tremendous amount of preparation to ensuring the approximately 3 million spectators that line the route have a great time at this year’s parade. And please remember, if you see something, say something. Thank you.

Mayor Adams: So we’re ready for a few on-topic questions, no off-topics because we don’t want no scrooges out here today. On-topic. Bernadette. How are you doing? Thank you.

Question: How many additional officers have been deployed for safety reasons?

Mayor Adams: Okay, so before we depart, Chief Corey, can you please come up and just address us as you finish that great career, man.

Mayor Adams: Really, really, really appreciate you. Born in New York, raised in New York, and I just believe we owe him such a debt of gratitude for serving over 30 years in the NYPD. Chief Corey.

Corey: Good afternoon everybody. So I’m going to say this, and I’m probably going to get in a little trouble for it on the back end, but this is actually my favorite event that we do all year. So the mayor mentioned, I’m a native New Yorker. I’m born and raised in Brooklyn, and as a small child I came here twice — I think my parents took myself and my brother and sister here to the parade. And then probably from the age of 11 or 12, my sister and I would hop on the subway and come into Manhattan with a bunch of our school friends on Thanksgiving morning to see the parade.

I couldn’t really see much because we were always in the back of the crowd. I guess we got here too late. So the few dozen times that I’ve been privileged to work this since being with the Police Department, I’ve had a front row seat right up in the front and I get to see everything much like I have throughout the rest of the city for 34 years. So I couldn’t be prouder to have been part of this, and I am really, really looking forward to a fantastic day tomorrow. A great parade. I will see you all out there. Say hello, because I’ll have a big smile on my face as I walk up and down the avenue for the last time. Thank you very much. Thank you again. (Applause.)