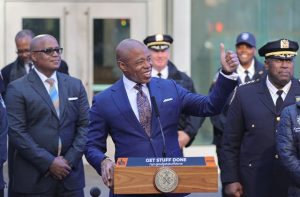 Police Commissioner Keechant Sewell: Thank you, Mr. Mayor, and good afternoon everyone. Thank you for being here and happy New Year. As with every major event the NYPD prepares for, planning surrounding this event began right after the confetti dropped on January 1st. Always involved in these conversations is the FDNY and all of our law enforcement partners. The state police, the Secret Service, the FBI, and more. Equally important, of course, is the Times Square Alliance, and you’ll hear from Tom Harris in a moment. All of these collaborations are vital to everything we do throughout the year, leading up to and including the ball drop here, as the mayor said, at the crossroads of the world. Nothing we accomplish in our profession can be done alone. This is how the New York City Police Department is able to carry out its mission of delivering the safest and most enjoyable event possible.

As always, as the mayor stated, you will see thousands of uniformed police officers out there on a post in addition to the many officers assigned to their regular duties of patrolling all of our neighborhoods throughout the streets, subways and housing developments. As we ensure the safety of everyone moving around the city and enjoying these festivities, there will also be much that the public does not see, intentionally. It is an elaborate, layered approach the Chief Galati will discuss shortly. At this time there are no specific credible threats to New York City or any of our events surrounding New Year’s Eve. That said, I ask the members of the public to always remain vigilant. Every night and day in New York City there are millions of eyes and ears out there, and tomorrow night there’ll be millions more. If anyone sees something that does not look right or makes them feel uncomfortable, tell a police officer, call 911 or contact our counterterrorism hotline at 1-888 NYC SAFE and we will investigate.

That is what the women and men of the NYPD do every single day throughout the year, and they do it better than anyone. Remember, public safety takes everyone doing their part. And New Yorkers have proven time and again that they are up to the task. The bottom line is, New York City is excited and looking forward to ringing in 2023 with another enjoyable New Year’s Eve, all under the umbrella of the most well-policed, best-protected event in the entire world. Thank you all and happy New Year again.

Mayor Eric Adams: Thank you. Thank you. Thank you so much. Folks in the background, how many of you are from out of town? Anyone visiting? One thing, spend money. Spend a lot of money. That’s what we ask when you’re here. Spend a lot of money. We are really excited about bringing in the New Year’s here, and I think Julian is accurate when he states that this is the crossroad of the entire country right here in Times Square. Last year I was here swearing in as the mayor of this amazing city, but the goal is a very clear goal, and that is public safety. We must be safe, and we can do it in a very organized fashion. But on that day, you see the actual sausage. So much goes into making that sausage, and it’s the coordination of all of our agencies. NYPD, FDNY, DOT, and all of our agencies coming together to make sure that the people of not only this city, but the millions of people who are coming here to visit, are going to feel as safe as possible.

I want to thank the alliance. Tom has been a real partner. We met earlier this week to talk about how we continue our enhancement of public safety in this area. The alliance has a real partnership with our various agencies to make sure just continue to attract the magnet that we deserve. You look at how well we’re doing not only in hotels… We are leading the major hotel market out of the 25 major markets, New York City is number one. When you look at how well we’re doing in our Broadway productions, you’re seeing we’re getting record numbers of pre or post-pandemic returning. Then our tourism, 56 million tourists are predicted to be here this year, and 72 million next year. New York is becoming an attractive place for not only our international tourists but also our domestic tourists… I’ll let the fire truck…

But the goal of public safety is both seen and intentionally unseen. The NYPD and our other local public safety apparatus, they’re going to have a visible presence. But at the same time, they’re going to be among the crowds so that people don’t know exactly who’s present and who’s here. We want you to be safe this time of the year during the celebration, bringing in 2023. Want you to enjoy yourselves. And then go on our website, and get the items that will slow up your screening into the safety area. There are certain items you cannot bring into the safety zone, the safety area that we have. So become knowledgeable of it beforehand so you can come in without a problem. The lucky ones that are going to be upfront and able to see the ball drop, dress warmly. It’s going to be a nice day. We expect some rain. But as I recall, years to come, rain or sunshine, it doesn’t stop those who come in to bring in the New Year’s here in the greatest city, we would like to believe, on the globe.

And so I want to turn it over to our amazing police commissioner who has really brought about the whole theme of public safety in our city. I just wanted to thank her and the entire team that we have here, on how we’re going to protect those who come here to bring in the New Year’s. Happy New Year’s everyone. We’re looking forward… Hip-hop is 50 this year, so we are going to have a real celebration around hip-hop is 50. That’s part of the celebration as we come in and bring in a new year this year. I wish everyone a very safe and prosperous New Year as we move into 2023.