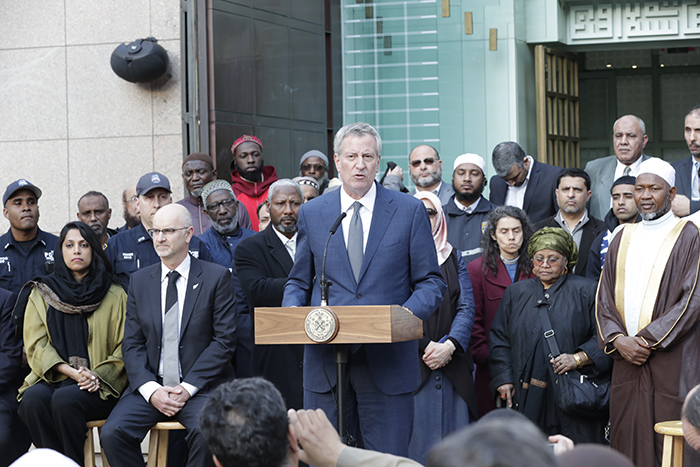 Thank you very much. I stand here today as a leader of this city to send a clear message to all our Muslim brothers and sisters that we stand with you in solidarity. We understand the pain you’re feeling at this moment and the loss you are feeling, and we are here to ensure that this community is respected and embraced and protected. We know that in our hour of need, particularly when hate and violence stalk us, that we are protected every day by the men and women of the NYPD. And as I arrived, I saw a strong NYPD presence around this mosque, and that’s true around mosques all over this city. And I want to thank the men and women of the NYPD for their strong show of support protecting this community. Thank you.

My colleagues who spoke before me painted a picture of what we’re experiencing now not just in the United States, but in other countries that we all consider to be democracies, countries we consider to be advanced, and yet we are seeing this violence rise up more and more, and this hatred. And in a world where we wonder what norms are left, what limits, what standards are left, this particularly painful reality that just in the last few years we more and more see attacks inside houses of worship. The most unthinkable, unspeakable idea is now becoming somehow common. And as you heard, the horrible attack inside Mother Emanuel AME Church in Charleston, South Carolina, where I was on Sunday – in that church where that attack happened. First Baptist Church, Sutherland Springs, Texas; Tree of Life Synagogue in Pittsburgh; and now a mosque so many thousands of miles away in New Zealand – this is a sickness that is growing in our society, and I agree with my colleagues that we have to be the ones to stop it. Our houses of worship cannot be turned into killing fields. We have to be clear, as a society, we will not tolerate any violence against people of faith, against people because of their race, their ethnicity, for any reason. And we have to weed out those among us who would propagate such violence.

White nationalism goes hand in hand with terrorism – let’s be clear. As a belief structure, it leads to only one place – to terror and violence – all those who believe in this idea of creating an atmosphere of threat for everyone else, and they must be addressed