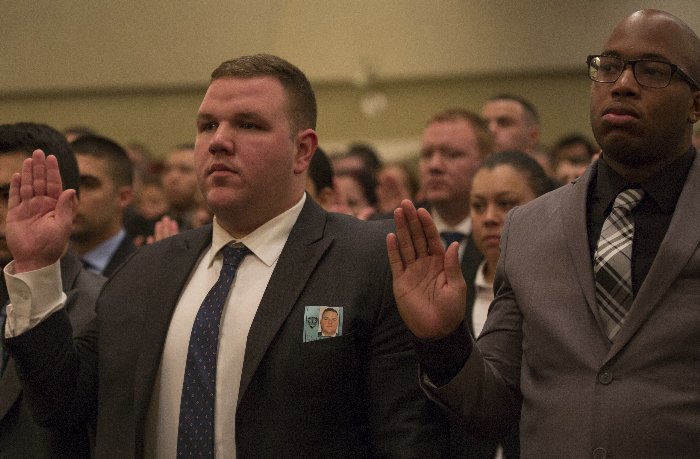 Mayor Bill de Blasio: Excellent. It is so good to be with you here as you start down this road – as you start on this pathway to such a noble career. I want to congratulate each and every one of you for beginning a journey that I guarantee you will be one of great importance to the people of this city.

I want to thank you for making this choice.

I want to thank two people who have made some of this great progress possible – the Speaker of the City Council Melissa Mark-Viverito and the Chair of the Public Safety Committee in the council, Vanessa Gibson – both of whom have been extraordinarily supportive of our efforts to add additional police officers, to make sure that we have the best technology and the best training available for all of our officers to make sure you are safe in all you do. So, I want to thank the elected leaders who believe in this mission and have supported it every step along the way.

It will be my honor in just a few minutes to swear you in – 1,365 of you – 1,365 people who have made a choice of such importance, and who very soon will help us to keep this city safe and make it even safer.

You know the statistics are in for this year – excuse me, the year, I should say. We just finished 2015 – and, once again, extraordinary progress by this department. We have earned the title the safest big city in America – we’ve earned it yet again, and we’ve shown that we can do even better. We have shown the world that we can protect our people even in the face of extraordinary international danger. For 14 straight years, this department has done an amazing job preventing acts of terror. And don’t for a moment forget the fact that there have been threats on New York City, there have been attempts, but this department, and its extraordinary intelligence-gathering capacity, and the great work of all the men and women of the NYPD has thwarted those attempts again and again. So, we are the best prepared city in the entire country at preventing terror and dealing with the environment we find ourselves in today.

You are going to be there for eight-and-a-half million people and they’re going to depend on you. They believe in you. They need you. As I said, you’re joining this department at just right time, in my view. You’re joining a winning team. You’re joining a team that has not only proven for well over 20 years that it can make this city safer and safer, but it continues to get better in so many ways. It’s a team that never rests on its laurels. The head coach over here, Commissioner Bratton, would never let this team rest on its laurels. He never lets himself rest on his laurels. He’s constantly looking for the next innovation. How we can use technology better? How we can use training better? What are the tools that will make people even more effective?

And, it’s important to note, yes there are some very big challenges out there, but, as we saw at the end of 2015, once again, crime driven down – 1.7 percent overall serious crime – almost two percent – and over the course of just the last two years, a 5.8 percent drop in overall serious crimes. Shootings went down last year, gun arrests went up ten percent – these are indicators of huge improvements that you will get to build on. These are indicators of a team that’s getting stronger all the time, and you’re going to be the new blood. You’re going to be the energetic, new contribution to this extraordinary progress.

And I remind people that there are some things the NYPD does and, in fact, makes look easy that no other police department in this country could possibly do. Look what happened just a few nights ago – December 31st. The eyes of the entire world on New York City – and, yes, we knew there were evil doers in the world who had an interest in disrupting all that we do in this city and in this country – but the preparation was in place. Our officers were out in force. The planning was perfect, and the biggest New Year’s party anywhere in the world came off without a hitch; the same as the Thanksgiving Day Parade came off without a hitch – had the biggest attendance in 90 years, in fact; the same as the UN General Assembly – well over 150 world leaders gathered; and, His Holiness, the Pope, here for his visit. And the NYPD made all of that come together seamlessly, working with our federal partners.

That’s what an extraordinary organization this is – that can do all those things simultaneously, and so well. You get to be a part of it. You get to experience all of it. You get to contribute to it. And some of you may choose to one day join the leadership up here. Some of you, if you have the drive, the determination, the ability, will one day sit in this line. And if that’s what interests you, if that’s what you want to set your sights on, pay attention – pay attention to the people up here and how they handle this extraordinary work. You’ll find no better role model in police leadership than Bill Bratton, and you’ll have an opportunity to serve under him and learn from him.

Your class represents everything good about New York City because you come from every part of New York City. You look like New York City. You represent all of the communities. This great city – greatest in the world – is a city of immigrants and always has been. Whether it was my grandparents from southern Italy, or your parents, grandparents, great grandparents – from every corner of the world, we brought to this city – our ancestors brought to this city their ability, their drive, their belief, their faith, and they made this place great, and you represent all of it. You represent a police force ready to respond to the needs of the 21st century, and to include all our communities in that work, because you can relate to every single part of our city. You’re a police force that looks like New York City also because we have the highest percentage of women in this class of any class since 2009, and that is a very good thing for this department.

106 of you – 106 of you deserve some special appreciation as well, because you’re not only going on this important mission, but you went on a crucial mission before, serving our nation in the armed forces, and I want us all to applaud those 106 good men and women. 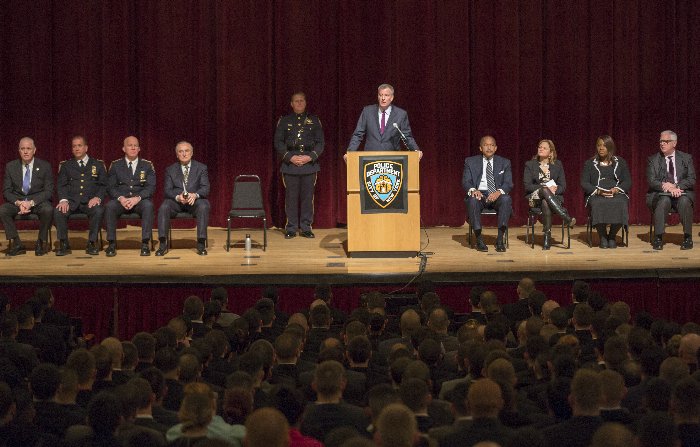 One of the powerful things about the NYPD is that there is a tremendous tradition, and there are families who have had members serve over many generations, and then there many of you who are starting the tradition for the first time in your family, and both those strands are necessary. We need that deep tradition. We need that family bond. And we need the new blood and the new families joining. But it’s so wonderful that that tradition gives this department strength.

Let me give you an example – one of you today, Patrick O’Connor – namesake of his grandfather, Patrick Joseph O’Connor, who was a patrolman in the emergency service unit. Unfortunately, and very tragically, his grandfather stopped to assist a motorist – stopped to help someone in need, and was killed in a collision 10 years into his time on the job. But wouldn’t he be proud of his grandson, carrying on the tradition, and picking up the mantle, and continuing this crucial work?

And Leonard Ragaglia Jr. – namesake of his father, Leonard Regaglia, who served in both the NYPD and FDNY, and made the ultimate sacrifice serving all of us on 9/11. Again, wouldn’t he be proud to see his son pick up the mission and continue on with it?

That tradition will help all of you. There’s so much to draw upon in this great department. And each of you will create new traditions and new strengths for this department. And you will define not only the future of this city, you will define the future of American policing. I have been so impressed over these last two years by what the leadership team here has done to continue to drive crime down, to prepare us against the threat of terror, and to bring police closer to communities simultaneously. There are many doubting Thomas’s in the world, and many who believed that those things couldn’t be done simultaneously, but this department under this leadership has done just that. You see real progress in the relationship between police and community. You see fewer and fewer complaints from community members as their connection and partnership to police officers are deepening. You see the beginning of an extraordinary neighborhood policing strategy that means that our officers will have the ability to know their community as well, to know all the people in the community who can give them the information they need so everyone will be safer – officers and community members alike. One things we learn over and over again is intelligence – intelligence gathering, information is one of the crucial ways to stop crime before it even happens. Our new neighborhood policing strategy is already yielding great results, preventing crime, and making communities safer.

Now, you’re part of another part of important history – and again, great thanks to Speaker Mark-Viverito, and Chair Gibson, and the entire City Council, because in the last budget in June, they authorized 1,300 more officers for this department, and you represent so much of that progress. Those 1,300 officers, plus over 700 who will go from desk jobs to making our streets safer, means in real patrol-strength terms, we will have over 2,000 more officers on our streets by the end of this year. That’s going to make everyone safer. That’s going to mean you have more support as well in all the work that you do.

So, you’re the part of a tradition as well in the sense that for the first time in, I think, almost 14 years, we see an increase in the patrol strength to allow this department to reach even farther to address crucial quality of life issues, to help ensure this city is as safe as it can be, to bond police and community together as never before.

You’ve benefitted from extraordinary training – the most modern, the most advanced, the most sophisticated training to keep you safe – training to help you diffuse challenging situations; training that helps you understand the afflictions of those who have mental illness; training that’s the kind of training needed for someone dealing with the complexities of New York City. Commissioner Bratton not only believes in training – as do I – but believes it has to be a regular part of your professional trajectory as a police officer, and we are committed to make sure that training regularly occurs to keep making you better all the time.

We will keep investing. We’re investing a lot in you, in your training, in your preparation. And we’re going to keep investing in you, because we need you, and we believe in you, and we know that this city will become better as you become better. So, this is the beginning of an important mission you go on. We know it’s difficult. We know it can be dangerous. We know it took a lot of guts, a lot of compassion, a lot of determination to make this choice. It’s our job to be with you every step of the way, and we will. And we will do it to honor the choice you have made and the great tradition of this department.

Now, it is my pleasure and distinct honor to issue the Oath of Office.

Congratulations, and God bless you all.