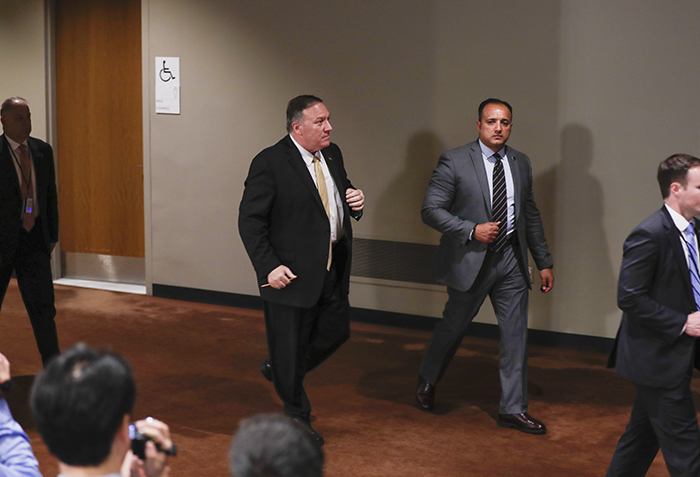 With the participation of the Secretary of State of the United States, Mike Pompeo, the Security Council today (20 Aug) held a debate on the challenges to peace and security in the Middle East, including the situation in the Strait of Homuz, US-Iran relations, and the Joint Comprehensive Plan of Action (JCPOA).

The Secretary-General’s Chef de Cabinet, Maria Luiza Ribeiro Viotti, told the Council that “the series of incidents in the Strait of Hormuz and adjacent waterways have raised tensions to dangerous levels.”

Ribeiro Viotti said it was “crucial that the rights and duties related to navigation are respected in accordance with international law” and urgently called for “restraint and genuine dialogue.”

She warned against the risk that “a minor miscalculation would inadvertently lead to a major confrontation, with disastrous consequences even well beyond the region.”

The JCPOA is a 2015 nuclear agreement between Iran and the five permanent members of the Security Council, plus Germany and the European Union. On 8 May 2018 the United States announced its withdrawal from the agreement.

Pompeo told the Council that “the Islamic Republic of Iran and its proxies continue to foment terror and unrest in Iraq, Lebanon, Syria, and Yemen, with devastating humanitarian consequences.”

He said, “since the United States declared our intention to bring all Iranian oil purchases to zero in April, the Ayatollah has gone all in on a campaign of extortion diplomacy.”

Pompeo urged urged the Council to extend an arms embargo on Iran that is due to expire in 2020 as part of the JCPOA.
He said, “the international community will have plenty of time to see how long it has until Iran is unshackled to create new turmoil and figure out what it must do to prevent this from happening. Clearly, from Aleppo to Aden; from Tripoli to Teheran, greater cooperation in the Middle East is needed more than ever. We need fresh thinking to solve old problem.”

Iranian Ambassador Majid Takht-Ravanchi recounted the United States’ history of “US interference in Iran,” including “supporting Saddam Hussein in the situation against Iran; downing of an Iranian passenger flight and killing all 280 on board, including 66 children; supporting several coup attempts; and its economic terrorism targeting ordinary and vulnerable Iranians like patients, by using food and medicine as a weapon against them.”

Takht-Ravanchi said, “one of the main causes of instability and insecurity of our sensitive region is the military presence by the US who has deployed over 70,000 troops across the Middle East.”

Outside the Council Pompeo, joined by the Minister of Foreign Affairs of Poland, Jacek Czaputowicz, who presided today’s session, spoke to the press.

Pompeo said, “the reason we don’t want that crude oil to go to Syria, I think is shared by the entire world. That crude oil will be offloaded, sold, used, by the Quds force, and organization that has killed countless Americans and people all across the world. And we want to deny them the resources to continue their horrific terror campaign all across the world. That’s the rationale for preventing a ship that’s loaded with crude oil arriving in Syria.”

Czaputowicz for his part, spoke about the “Warsaw Process” following the Ministerial meeting on the Middle East that took place in Warsaw, co-organized by Poland and the United States.

He said, “we believe that the Warsaw process will allow us to agree on further actions to improve security situation in the region. We need a positive approach in our opinion to restore peace and economic growth in the Middle East. Promoting entrepreneurship, strengthening good governance, combatting corruption, and ensuring access to education, are key to address social issues and to unlock economic potential of the region.”