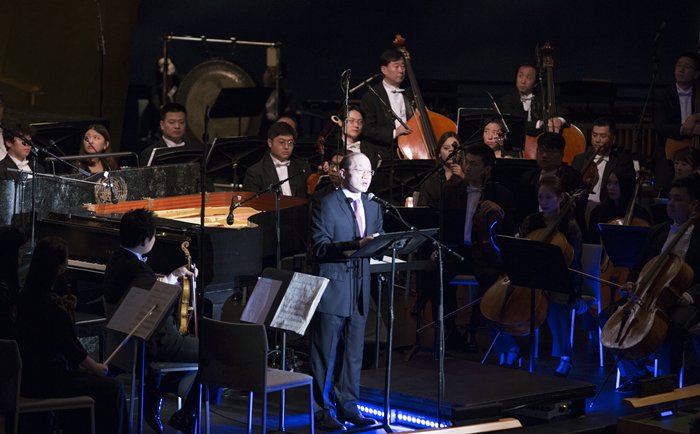 UNITED NATIONS, Aug. 29 – The power of music was invoked at a Shanghai Symphony Orchestra concert at the UN Friday night to reflect on how the world has progressed during the 70 years of the UN and to honor the victims of World War II.

“We come together this evening through the power of music to reflect on the progress that the international community has made in the past 70 years,” Cristina Gallach, the Under-Secretary-General for Communications and Public Information, said before the concert. “It is also a time to reflect on the challenges ahead of us.”

The UN has been marking its 70th anniversary and the end of the second World War with several special events like this concert. This is also a pivotal time for UN as it looks ahead to the adoption of the new 17 Sustainable Development Goals for its post-2015 agenda that will replace the Millenium Development Goals that come to a close at the end of this year.

“Ludwig Van Beethoven once said that music is a higher revelation than all wisdom and philosophy,” said Ambassador Liu Jieyi, China’s Permanent Representative to the UN, whose mission hosted the concert.

“If a parallel is drawn between the Second World War and the symphony (it is) about light and darkness,” he said.

“The Second World War was a dark page in human history”, said Jieyi, “It brought untold sorrow to Asia, Europe, Africa, the Pacific, and many other parts of the world, and wreaked unprecedented havoc on human civilization. As a defining moment in history, peace loving nations rose against fascism. Owing to their monumental sacrifices, justice overcame evil, and the world saw progress and peace.”

“The Chinese people’s war of resistance against Japanese aggression was an important and heroic movement” said Jieyi. “Today we are organizing this concert to honor the memory of innocent victims of the war, to pay tribute to all those who fought bravely, and to those who have fallen for peace to prevail.”

Appropriately one of concert’s highlights was the theme song from Schindler’s list, “as a reminder of the different ways Oscar Schindler protected Jewish people during the holocaust,” said Gallach. 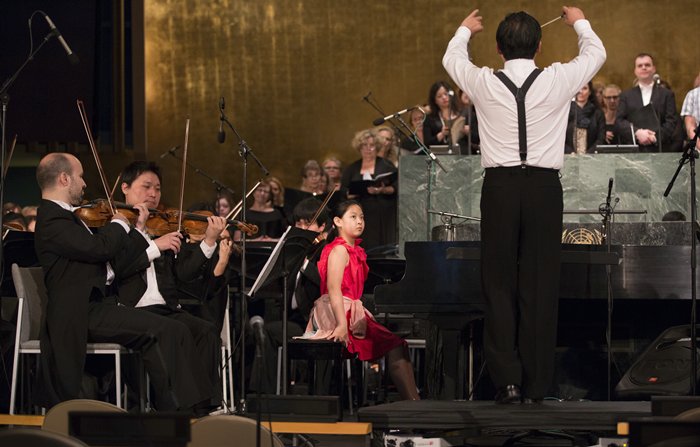 The Schindler’s List theme composition was played on the piano by 12 year-old piano prodigy Serena Wang, who told Europa News that she started playing piano for fun when she was 4 years old while she lived in San Francisco, and started playing for the orchestra when she moved to China six years ago.

The Shanghai Symphony Orchestra, which was founded in 1879 as the first mordern orchestra in China, has a history that mirrors the World War II experience of the nation. During the War the orchestra was taken over by the Japanese occupiers, but when the War ended it was back with China’s national government, and Chinese musicians were given more opportunity.

“It is a concert in which the music we play is about memories and about new beginnings,” said Long Yu, the conductor of Shanghai Symphony Orchestra.

“World War Two was of course a great tragedy, as well as a victory over evil, which must be remembered, while the birth of the UN from out of the wreckage of that war was a new beginning for the world,” he added.

The show also featured the world premiere of the Symphony Overture composed by Zou Ye, named “Shanghai 1931”, which was specially commissioned for Friday’s concert.

The concert ended with a piece by Beethoven, bringing the Master Voices Choir on stage for the magnificent finale.