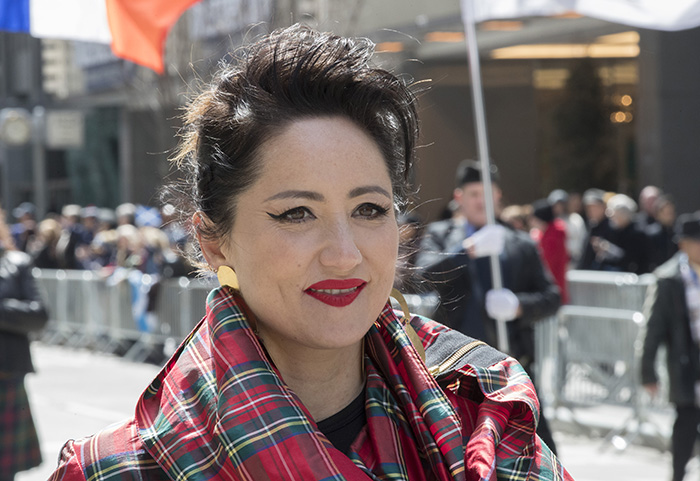 The New York Tartan Day parade on Saturday had its first female Grand Marshal in its twenty year history, musician KT Tunstall. She marched up Sixth Avenue from 44th Street to Central Park in a tartan suit accompanied by a rescue greyhound named King, in a tartan coat. She said she “decided to highlight a rescue dog center here in New York, because there’s just nothing like a dog in a tartan dog jacket, right?”

Now, Tunstall sees things changing: “It has taken a long time. As I get older I realize how slow humanity can be to move on its own. But look at the smoking ban. An iron fist came down on that and, frankly, it can on this issue, too. It’s frustrating, but I believe we’re at a tipping point now, watching it happen.”

More than 30,000 people flocked to see the parade head up Sixth Avenue, in its 20th year. In from Scotland for the event, Lord Thurso said, “Scotland Week is something that the diaspora here in New York invented some 20 years ago. It is a fabulous event. It brings together people who are Scots at heart, Scots who have emigrated here, people whose parents, grandparents and great-grandparents came here and people who just like the idea of Scotland and the wonderful mix that is modern Scotland. That is glorious cultural heritage and the modern innovative Scotland that is creating new industries. Presenting that can be exploited here in a way that we can convey a message to people who might want to invest in Scotland or might like to come and work or just visit. So it is VisitScotland getting the maximum value for the scarce resources that we all compete for. This is a really important event for us.”

Responding to critics of the event, Lord Thurso said “This week is something that people in America developed. It is their expression of culture in exactly the same way as the St Patrick’s Day Parade is the Irish expressing themselves in New York. It would be quite rude and insulting if we were to come along and tell them they have it all wrong. However it is done, it is their way of doing it, and I view it as a fantastic opportunity to talk about our great culture and history. Last night we hosted a reception where we were presenting stories of modern Scotland, of people who have moved their companies’ headquarters to Glasgow in one particular case. Informatics, biotechnology, all of these things are what Scotland is doing extremely well. If we can hook somebody to come and visit us because they like what happens here this week and can then introduce them to the other things that we have to offer then to me that is simply clever fishing.”

Scottish media personality Alex Salmond was at the Tartan Day event, promoting an upcoming show with Catalan professor Clara Ponsati, recently released on bail following the issuance of a European arrest warrant. Citing the common yearning for independence among some in Scotland as in Catalonia, Salmond said, ““My live show is still touring. The next dates are in Dundee and Edinburgh at the end of this month. We’re inviting a certain Catalonian minister, as was, now a professor at St Andrews University, who will be a very special and surprise guest.” The urge for independence was felt at the Tartan Day parade, belatedly this year with its female Grand Marshal.