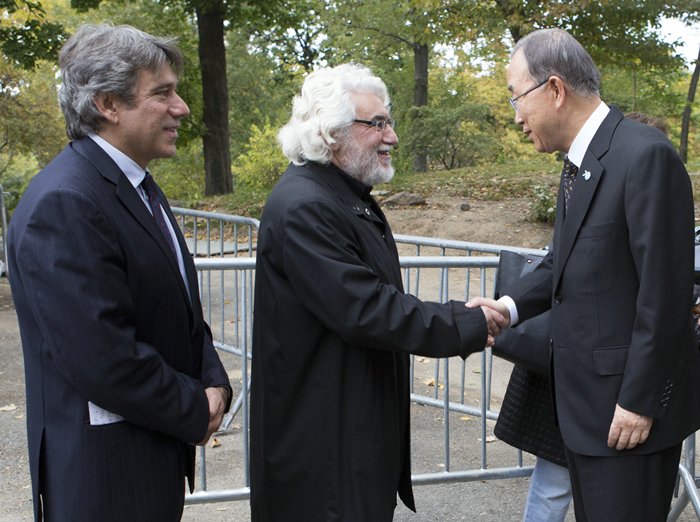 NEW YORK – October 24 2015 – “I started thinking about this piece a long time ago. I felt like maybe I needed to work to create something that gathered all values, represented all countries and the years of the United Nations”, said to Europanewswire Spanish artist Cristobal Gabarrón . He has been visiting New York these past days on the occasion of the inauguration of his last work “Enlightened Universe”, which took place on October 24, 2015.

The selection of the day was not casual, as it marked the 70th anniversary of the United Nation – a date observed worldwide with the lightning of famous landmarks in UN blue, and online with the hashtag #UN70. Those who were lucky enough to spend the day in the Big Apple had then the chance to see the UN Headquarters and the Empire State lit in blue. But, also, could enjoy the opportunity to participate at the unveiling of the commemorative art installation at Rumsey Playfield, in Central Park, at 4:30 pm. 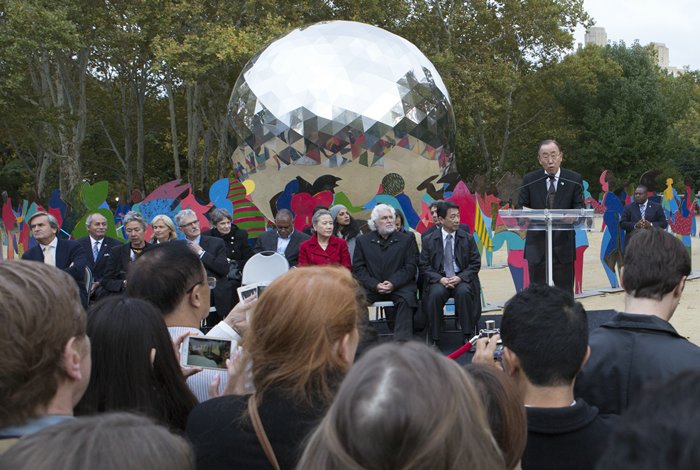 New Yorkers, tourists from all over the world and NYC officials, such as the Commissioner for Department of Parks and Recreation Mitchell Silver, joined Gabarrón on this event, which was also attended by UN Secretary General Ban Ki-moon, along with President of the 70th session of the General Assembly Mogens Lykketoft, President of the Security Council Román Oyarzun, and President of the Economic and Social Council Mr. Oh Joon.

The link between the sculpture and the United Nations is very tight, and the same may be said about the relationship between the artist and the international organization. In fact, this is not the first time Gabarrón has produced a work of art for the UN.

“I have been collaborating with the United Nations since 1986”, recalled the Spanish painter, sculptor and mural-creator (his “Construction in the Woods — Project for a City” is one of the longest mural painting in the world, extending 350 feet along the outskirts of Valladolid, Spain). 1986 had been unanimously decreed by the 40th Session of the United Nations General Assembly as the International Year of Peace, and to mark the occasion, Gabarrón created ”Hopes For Peace”, an abstract painting evoking a particular dove. The image became an emblem for peace, the World Federation of United Nations Associations (Wfuna) issued a special courier cover with a reproduction of it, as well as a limited edition lithograph and a first-ever Wfuna card.

Prior to that, some of his works had long been exhibited at the United Nations Environment Programme in Nairobi, Kenya, and some had also been part of valuable private collections, such as the one of then United Nations General Assembly President, H.E. Sr. Jaime de Pinies.

“The UN and I also collaborated ahead of the Millennium summit”: “Dawn in the New Millennium” is in fact the title of the painting presented in 2000 as an expression of his support for the goals of the United Nations. It feature on the UN Millennium poster as well as on other promotional products for the United Nations millennium campaign.

Such symbolism representing the natural world, human civilization and Universe is present in the works created then, just as in the one unveiled on October 24. Diversity and union, action and stillness, inner and outer space: a strong dualism characterizes this “Enlightened Universe”, inviting the spectator to reflect and act on today’s challenges.

It depicts 70 life-size figures, each one “representing one of the 70 years of the un, but also people of different sexes, colors, religion and cultures joined in hand – here we have the diversity unite”, commented Gabarrón, who celebrated his own 70th birthday, last April.

The 70 figures surround a central globe, creating a human chain of UN values, including global citizenship, tolerance, solidarity, respect for nature and shared responsibility. The sculpture in its entirety and construction means to refer to the care for environment and nature: the sphere – “which represents the planet as well as perfection and imperfection”, added the artist – measures 6,371 millimetres in diameter to correspond to the Earth’s average radius of 6,371 kilometres.

Gabarrón has also collaborate with IOC and has been exposed and famous worldwide from America to Asia, passing through Europe. Besides the above mentioned, major works include the Olympic Mural for the Barcelona Olympic Games (1992), the Encounter Mural for the Universal Exhibition of Seville (1992) and the sculptural project “Atlanta Start” (1996) and the Millennium Chapel (2001). During the first half of 2015, his art landed for his first solo exhibition in China, hosted at the China Art Museum of Shanghai.

The sculpture will remain in Central Park – “a great venue, always of great importance to me”, told the sculptor – until November, 15, then it will be displayed in major cities across the globe.