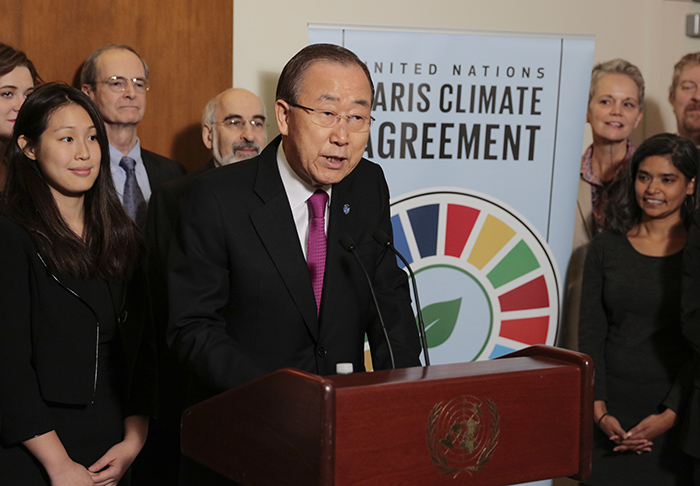 United Nations, New York, USA, November 04 2016 – Secretary-General Ban Ki-moon speaks to journalists on the entry into force of the Paris Agreement on climate change today at the UN Headquarters in New York.

UNITED NATIONS, Nov. 04 2016 – The Paris Agreement on Climate Change finally enters into force 4 November. This milestone against climate change was celebrated with a commemoration event at the UN Headquarters.

Secretary-General Ban Ki-moon invited representatives of various civil society groups to present their ideas on the implementation of the Paris Agreement, as well as discuss their plans and concerns.

“Over the past decade, we forged a great global coalition for climate action.  Government officials, scientists, faith leaders, business executives and civil society activists around the world recognized that the future of people and planet was at stake. They made today possible,” Ban Ki-moon told the press before the event.

The Paris Agreement entered into force just in time before the start of COP22, which will take place in Marrakech, Morocco, from 7 to 18 November. 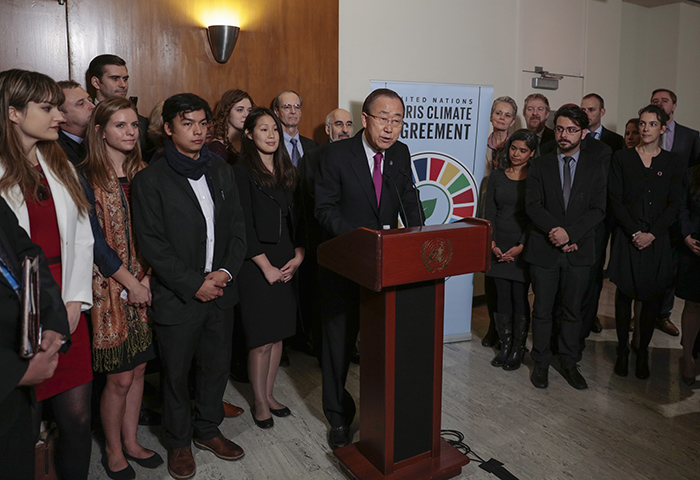 “Our challenge is to sustain the momentum that has propelled the Agreement into force. We remain in a race against time,” said Ban Ki-moon.

“But with the Paris Agreement and the 2030 Agenda for Sustainable Development, the world has the plans we need to make the shift to a low-emission, climate resilient path. Now is the time to strengthen global resolve, do what science demands and seize the opportunity to build a safer, more sustainable world for all.”

All signing parties agreed on measurements to help preventing the global temperature to rise above 2°C or, if possible, 1.5°C compared to pre-industrial levels and to strengthen climate resilience around the world.

“Climate change undermines the ability of countries to achieve and maintain sustainable development,” said H.E. Peter Thomson, President of the UN General Assembly, in a statement issued on the occasion of the entry into force of the Paris Agreement.

Secretary-General Ban Ki-moon speaks to journalists on the entry into force of the Paris Agreement on climate change today at the UN Headquarters in New York.
Photo: Luiz Rampelotto/EuropaNewswire

“We now have momentum, but this is no time for complacency. In our collective efforts to scale up climate action, we must be more ambitious in our targets. Climate change recognizes no borders,” said Thomson.

The Fijian diplomat applauded the rapid entry into force of the Paris Agreement, only one year after the climate summit where the parties negotiated and agreed on the international treaty. Fiji was the first country to ratify the agreement.

“Today’s entry into force of the Climate Change Agreement is a historic moment for humanity. … If implemented, it will result in sustainability for our species upon this planet. It constitutes a fundamental basis for collective climate action and is a key step in attaining the goals set out in the 2030 Agenda for Sustainable Development,” said Thomson.
“As a father and grandfather, I am overjoyed that the international community has recognized the severity of the situation and agreed to a common strategy that makes possible a sustainable way of life on this planet by addressing the fundamental challenge of climate change.”