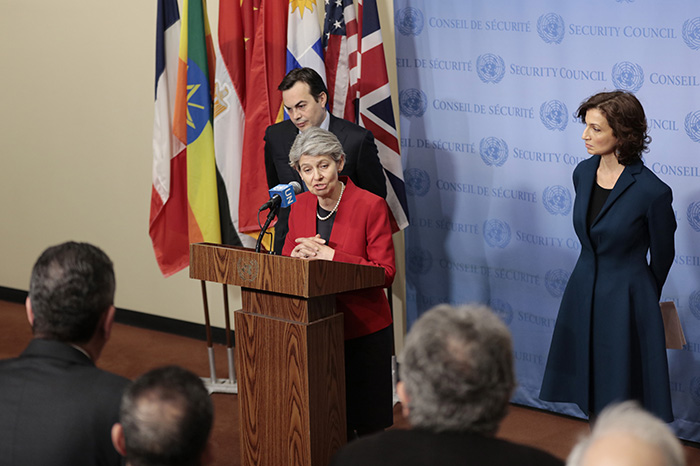 UN political chief Jeffrey Feltman said the resolution unanimously adopted by the Security Council aimed to “protect cultural heritage as a symbol of understanding and respect for all religions, beliefs and civilizations.”

The Security Council adopted Resolution 2347 today on preventing the destruction and trafficking of cultural heritage by terrorists and armed groups, which was drafted by France and Italy. Speaking at the meeting, said terrorist groups like ISIL exploit cultural sites to finance their operations and undermine the power of culture as a bridge between generations, people of different backgrounds and religions. He said the resolution provided a good basis help countries strengthen their criminal justice systems to prevent and respond to terrorists’ attacks against their cultural heritage.

UNESCO chief Irina Bokova said the deliberate destruction of cultural heritage is a war crime and a tactic of war used in a global strategy of cultural cleansing. She said that is why defending cultural heritage is inseparable from defending human lives. Bokova stressed that weapons were not enough to defeat violent extremism and building peace required “education, prevention, and the transmission of heritage. She hoped this was the message of this “historic resolution and its immense scope.”

French Minister of Culture said Audrey Azoulay said protecting cultural heritage was an issue of civilization and ethics, but also of security. She said funds raised from trafficking illicit artifacts were being used by terrorist groups to perpetuate and intensify conflicts. She said this was the first resolution to deal exclusively with the protection of cultural heritage during armed conflict which invites the international community “collectively to wisdom and respect for a long time.” Azoulay stressed the resolution worked for peace to prevent the cultural heritage from being “destroyed in a murderous attempt” to rewrite history and from being “hijacked” to finance violence.

Speaking to the press following the Council meeting, Italian Under-Secretary of State for Foreign Affairs, Vincenzo Amendola, called the resolution “historic” because it affirmed for the first time “that we have to react and there is a cultural dimension in fighting terrorism; and of course in preventing and solving conflict.”

Also speaking to reporters Bokova said it was clear for UNESCO that the protection of heritage was the best way to create resilience in societies to recognize the past and look to the future because it is so strongly linked with identities. She said she was overwhelmed by the adoption of the resolution as it was an “historic monument” in recognizing the importance of cultural diversity in conflict areas which put “the dots together between security, protection of heritage, the humanitarian aspects, respect for human rights and human dignity, and human diversity.”