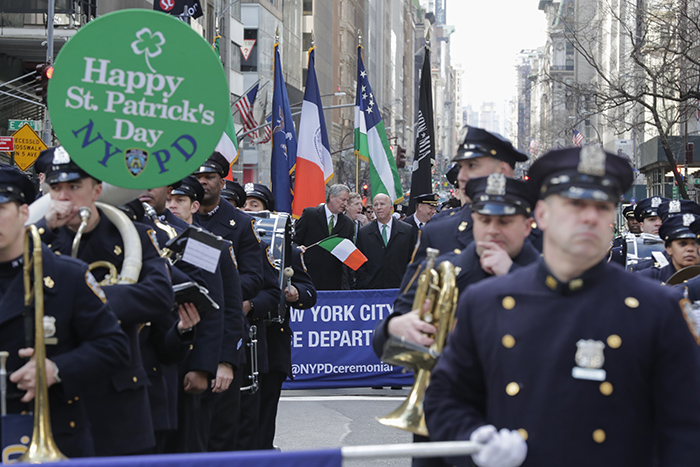 “So, who were the Irish who came here? They were writers and poets, they were soldiers, they were sandhogs, they were brick layers, certainly, more than a few politicians. And they changed our culture in so many ways. If we appreciate our democracy, it’s impossible to value it without understanding the contribution of the Irish who fought for their rights, who fought for a country and a city that would respect everyone no matter how many tried to exclude them.”

“We know that horrible sentence that we have had passed down from generation to generation – it’s something we remember because it was true – ‘No Irish Need Apply.’ That happened in this city and this nation for years and years. It is an example of something that was wrong then and that we still have to address today. ”

“The Irish were the targets in those times a century and a century-and-a-half ago. Now new communities are the targets but the impulse is the same. We have to remember that that idea of turning away people and disrespecting them never works in this country – it is not part of the American dream.”

“So, there is an Irish phrase that I think very simply states our resolve to never be divided from each other. And it’s simply this – ‘No, nay, never.’

“We will continue as a city for everyone, as a nation for everyone. No matter any voice of negativity, we will be the voices of hope. And one of the best ways to remember that is to remember who came before us, to really honor them. Every one of you can think of your parents, your grandparents, great-grandparents, and you have an image in your mind of what they lived and how they fought for a better life for all of us. Let’s think of them today. Let’s really think of those pictures in our mind and honor each and every one of them.”