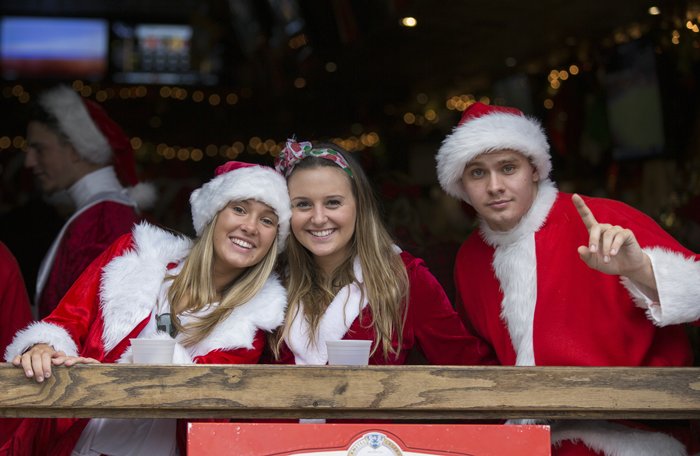 East Village, New York, USA, December 12 2015 – Several thousand Santas roamed the streets of the East Village in New York City celebrating the 21th anniversary of Santacon. SantaCon the annual mass gathering and pub crawl in with people dress in Santa Claus costumes or as other Christmas characters parade in several cities around the world.
Photos by: Luiz Rampelotto/EuropaNewswire

NEW YORK, DECEMBER 12 – Cozy Santas in pajamas. Sexy Santas in skirts (girls) or in open shirts (man). Funny Santas in “ugly Christmas sweaters, a gift from grandma”. Creative Santas with a home- and self-made cotton beard or some sort of a singing talent. Then imagine another universe of elves. And another one of personified Christmas trees, arms as branches, a neckless of bulbes. But there are also a very tall ginger man, an actually kind and hugger Grinch, Batman and Joker, as well as Jesus. All drunk or soon to be. It’s SantaCon after all.

With the Christmas holidays approaching, SantaCon is a hit (and well discussed) event attracting some students and young professionals all over the world, from Australia to Canada, from Iceland to South Africa, passing of course through the City. Waves of Christmas-themed participants joined the event on Saturday December 12, 2015, animating the streets, the squares, but mostly the bars and pubs of New York, from Williamsburg, Brooklyn to the East Village. This year, for the first time, the gathering started outside Manhattan, at as early as 10 a.m.: the appointment for the early birds was in McCannen Park, Brooklyn.

“We are going to drink a lot”, summed up Jeannie in her red, Santa baby dress. “We are trying to get the most fun out of it”, she admitted, announcing the plan of the girls’ night out.

But there is also another side to the story. At least, this is what her friend Sophia argues: “We love Christmas and this is for charity, so we are just trying to contribute, and donate the most money”.

SantaCon, which started 21 years ago in San Francisco as a protest against the commercialization of Christmas, this year is not only about drinking, but about giving too. In fact, the organizers are aiming at creating a new image for the event, which includes transforming it in an occasion to raise money for charity and social causes. Funds will go to associations like City Harvest, World Hoop Day, and Dance Parade. In return, generous Saint Nicks are promised access to exclusive route information and parties, as well as special gifts. Which means that the jovial (and yuletide) spirit is still the core of the convention.

“We wanna try get a big crowd to sing a Christmas carol. The exact scene at the end of Alf? That is what we are going for in the village, it’s going to happen”, laughed Joanna, Sophia and Amy, outside a pub on 13th street.

In the apartment attached to it, lives a resident that does not sound very happy about the goliardic day he’s witnessing: “It’s not going to be fun to me. It’s gonna be loud and long”, he commented with a bitter smile on his face.

Yet, the organizers have been urging participant to act responsively and respectfully of other people’ belongings and spaces, in the attempt of preventing behaviors like public urination, vomiting, and fights which in the past led to some arrests. No Bad Santas this time then, or that is the wish of the coordinators, who have been working with the New York Police Department and the Parks Department for the last month to make the pub crawl as orderly as possible. To this goal, the stops in each involved borough were made public on SantaCon’s website and social media, allowing those who want to skip the chaos to be able to do so. 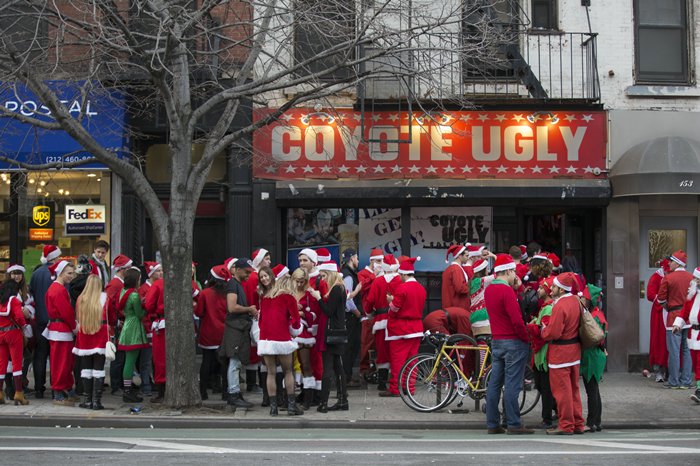 It also also stressed that “MTA police officers will be on duty at Penn Station, Grand Central Terminal and stations throughout the region, as well as on trains to enforce this restriction. The police will confiscate alcoholic beverages and issue summonses carrying fines or imprisonment. Violators may also be subject to removal from the train or station by police”. NJ TRANSIT also all banned alcohol consumption on trains.

At 6:30 pm no infringement has been reported. “Not a creature was stirring”. But the night is young.