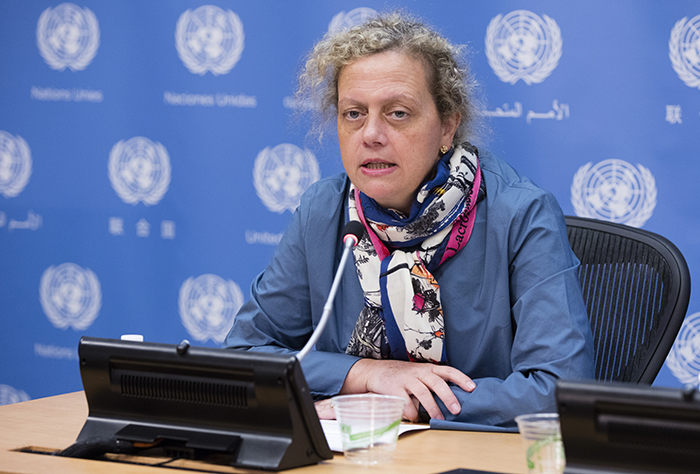 United Nations, New York, USA, April 05 2016 – Paloma Duran, Director of the Sustainable Development Goals Fund at the UN Development Programme (UNDP) during Alejandro Aravena, Chilean architect and winner of the Pritzker Architecture Prize for 2016 press encounter on the link between architecture and sustainable development today at the UN Headquarters in New York.

Development Goals Fund (SDG Fund). The Fund is supposed to serve as a bridge in the

transition from the Millennium Development Goals (MDGs) to the Sustainable

Development Goals (SDGs), which were adopted by the General Assembly in September

growth, food security and nutrition, as well as water and sanitation. All programs of the

Currently, the SDG Fund has 21 pilot programs in 21 countries which were carefully

“We are involving more actors through matching funds, we have taken learning from the

utilize the expertise of other UN agencies. For example, we learned from the MDG Fund

that facilitating strong participation by national and local stakeholders including civil

society during the design phase is key to program effectiveness and sustainability,“ Duran

strategy, introducing matching funds as a requirement to ensure the sustainability of the

Achievement Fund (2007-2013), the SDG Fund intends to act as a bridge in the transition

from MDGs to SDGs, providing concrete experiences on how to achieve a sustainable

and inclusive world post-2015 through its integrated and multidimensional joint

14 other UN agencies. Experience from the MDG Fund has shown that working with

“From the MDG Fund experience, joint programs had on average six participating UN

governance and implementation, thus the new joint programs as part of the SDG Fund

support a maximum of four UN agencies, with three agencies being the ideal number,“

Duran said. “We have also taken into account much of the learning from the extensive

number of programmatic activities and discussions from regional workshops.“

In order to achieve the SDGs, it is important to conduct research and gather information

on how countries, regions and businesses incorporate the Global Goals in their work.

Every company has the potential to make a contribution towards achieving the SDGs, for

contributions. Due to this vast potential, the SDG Fund tries to strengthen its ties with the

achieving the SDGs. As part of this intention, the Fund has created a Private Sector

Advisory Group and recently launched a new report, “Business and the United Nations“.

The Fund also appointed the Roca brothers, world-famous Spanish chefs, as the first

Goodwill Ambassadors of the new 2030 agenda.

learning from these joint collaborations,“ Duran said. “We are pleased to be building a