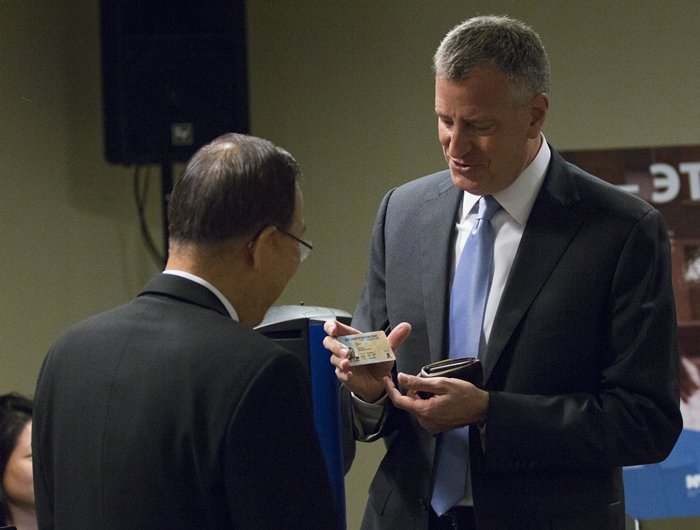 Mayor Bill de Blasio, it is a pleasure to welcome you once again to United Nations Headquarters.  Today we join hands with our great host City for a very special initiative — by hosting a pop-up registration site for New York City’s new municipal identification card.

It is called idNYC, it is free, and soon I will have my very own idNYC.  After more than eight years of calling New York home, I will finally be able to say that I am a New Yorker. 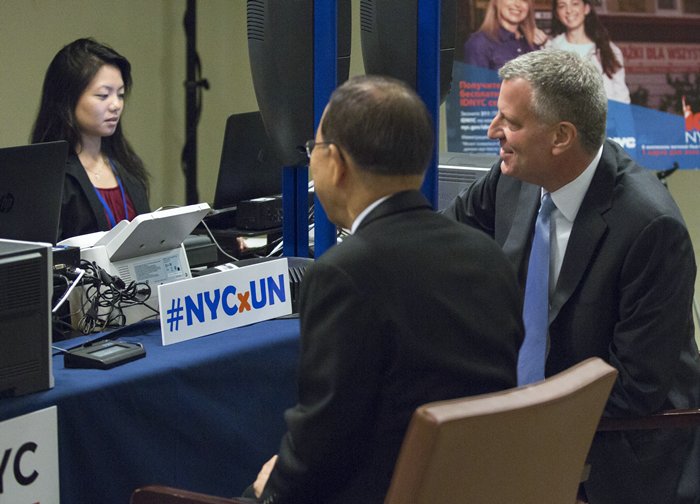 Mrs. Ban Soon taek tells me that she wants an idNYC, too.  She must have heard that it can give you free one-year membership at many of the City’s museums, zoos, concert halls and gardens.

This is a great initiative.  It is very practical and will benefit many young people and the diplomatic community living in New York in particular.  I hope that our United Nations staff who need ID will register as I have just done.  I wish this scheme great success. 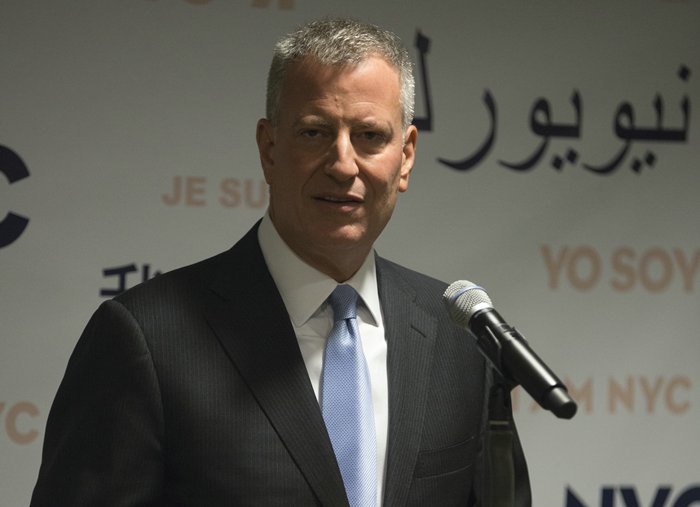 Back on January 12 2015 Mayor Bill de Blasio during a Press Conference for the lunching of IDNYC he said:

“IDNYC is not only a card for all New Yorkers, it is the gateway to City services, the key to opening a bank account or getting a library card, and the ticket to many of our city’s finest cultural institutions. More than that, this card represents who we are: New Yorkers who value equality, opportunity and diversity,” said Mayor Bill de Blasio. “I want to thank Speaker Mark-Viverito and our partners in the Council for their tremendous work and collaboration on this program. Today, we are launching the most ambitious, dynamic and useful municipal ID program in the country, which will have a real and tangible impact on the lives of all New Yorkers.”

The Mayor also announced the full suite of IDNYC benefits, including:

The IDNYC card will make government work more effectively and efficiently for New Yorkers by expanding access to the services, programs and opportunities available to City residents. It will be accepted by the New York Police Department for the purposes of issuing summonses or desk appearance tickets in lieu of arrest, and has been incorporated into the NYPD Patrol Guide. The IDNYC card will grant access to all City buildings, increasing the confidence of New Yorkers to interact with their local government, schools and hospitals. The IDNYC program will continue to expand functionality and grow after the launch date to create an integrated form of identification that will be the one card New Yorkers need in their wallet.