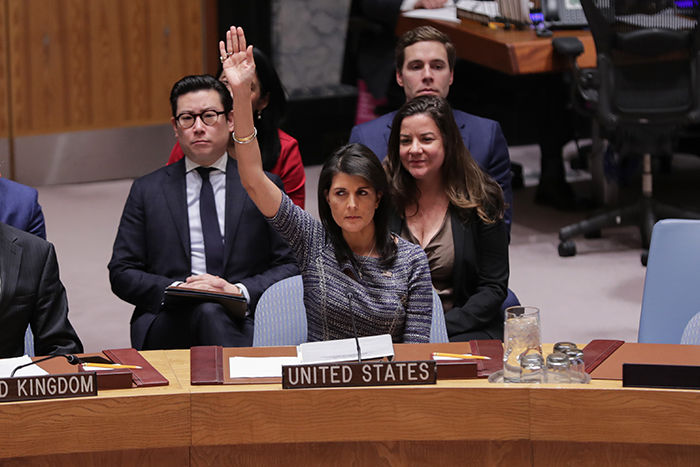 United Nations, New York, USA, December 22 2017 – Nikki R. Haley, Permanent Representative of the United States to the UN during a Security Council meeting that unanimously adoption of resolution 2397 (2017), condemning in the strongest terms the ballistic missile launch conducted by the Democratic Peoples Republic of Korea (DPRK) on 28 November 2017 in violation and flagrant disregard of the Security Council’s resolutions on non-proliferation today at the UN Headquarters in New York City.
Photo: Luiz Rampelotto/EuropaNewswire

The Security Council today unanimously adopted a resolution in response to the latest ballistic missile launch by the Democratic People’s Republic of Korea (DPRK), tightening sanctions including restrictions in oil imports.

After the vote, United States Ambassador, Nikki Haley, said this resolution “ratchets up the pressure on North Korea even further, building on our last resolution, which included the strongest sanctions ever imposed on them.”

Today, she said, “we cut deeper” and added that today’s resolution “achieves an 89 percent total reduction of the Kim regime’s ability to import gasoline, diesel, and other refined products.”

Furthermore, Haley said that “should the North Korean regime conduct another nuclear or ballistic missile test, this resolution commits the Security Council to take even further action.”

China, he said, “urges the DPRK to take seriously the demands of the international community, abide by and implement the Council resolutions and refrain from conducting any nuclear and missile tests.”

Japan’s Ambassador, Koro Bessho, said that “if North Korea wants peace and security it needs to demonstrate its sincere commitment and concrete measures for the denuclearization of the Korean Peninsula, comply fully with the relevant Security Council resolutions, and joint statements of the six-party talks, and come back to the meaningful dialogue table.”

For his part, The Republic of Korea’s Ambassador, Chull-joo Park, said “the DPRK should abandon the delusional idea of pursuing security through developing illegal nuclear weapons and ballistic missiles. Instead, it should engage in constructive dialogue and redirect its efforts to deliver prosperity and a better livelihood to its people. The choice is up to the DPRK.”

Secretary-General António Guterres issued a statement welcoming the continued unity of the Security Council, “which is essential to achieve the goal of denuclearisation and create the space for diplomatic initiatives aimed at achieving it in a peaceful manner.”