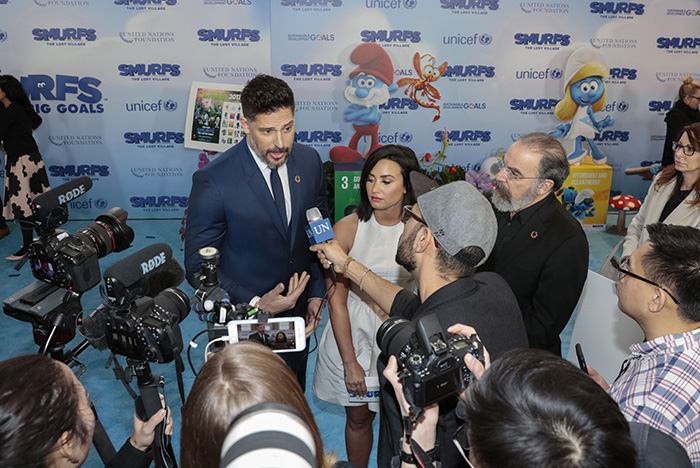 The “Small Smurfs Big Goals” campaign is designed to encourage young people everywhere to learn about and support the 17 Sustainable Development Goals adopted by world leaders in 2015 to help make the world more peaceful, equitable and healthy.
As part of the celebrations, Team Smurfs recognized three young advocates — Karan Jerath (20), Sarina Divan (17), and Noor Samee (17) — for their actions to promote the Goals.

Jerath, a UN Young Leader for the Sustainable Development Goals, invented a containment device that could prevent offshore oil spills and ensure the protection of marine life. Divan expanded a UN Foundation girl empowerment initiative at her high school and beyond, and Samee is a UNICEF blogger and advocate on social justice issues and raising awareness of the Sustainable Development Goals.

The movie’s U.S. stars — Demi Lovato, Joe Manganiello and Mandy Patinkin — presented the three young students with a symbolic key to the Smurfs Village in recognition of their work.

Mandy Patinkin, who plays “Papa Smurf”, said “There is no choice. We have to do this work to keep our planet safe, and particularly for those, all over the world right now, that are so vulnerable. I am thinking of the refugees that are suffering so dearly, who have been through so much, who have had very little opportunity and no freedom, to say nothing of good food, water and a home.”

Joe Manganiello, who plays “Hefty Smurf” said “children are the future, so, using our children’s movie to help educate a younger generation, like we are doing today, to create a more sustainable, healthier planet, I think it’s something very useful.”

Demi Lovato, who plays “Smurfette” said it was “very important” for the audience of this movie, “to see that the smallest change can make the biggest difference, and that’s what we learned from Smurfette in the movie, and I think we can all use that in our daily lives.”

At a later event at the General Assembly Hall, The actors and UN officials addressed some 1,500 students attending an international Model UN conference in the iconic General Assembly Hall of the United Nations, where they encouraged all participants and the public to join “Team Smurfs”.

Lovato said that SDG number 3 “includes a cause that is very close to my heart, mental health and well-being.”

She said “we hope our campaign will help all of us think about how our actions impact the planet. Everyone of us, even a small Smurf, can accomplish big goals. We understand that achieving these goals can seem like a daunting task, and it is. Big goals are hard. But everyone has the power to make a small change, and many small changes build to bigger ones. Together, as a team we can accomplish anything.”

The Small Smurfs Big Goals campaign culminates on the International Day of Happiness on 20 March, which emphasizes the importance of personal happiness and well-being. The idea is closely linked to the 17 Sustainable Development Goals, which include decent work for all, access to nutritious food, quality education and health services, and freedom from discrimination.

The campaign invites the general public to visit SmallSmurfsBigGoals.com to find out how to contribute to achieving the Sustainable Development Goals, and share information, ideas and images on social media.

The actors also premiered a new public service announcement video starring cast members of the film that inspires viewers to join the campaign and champion the Sustainable Development Goals.