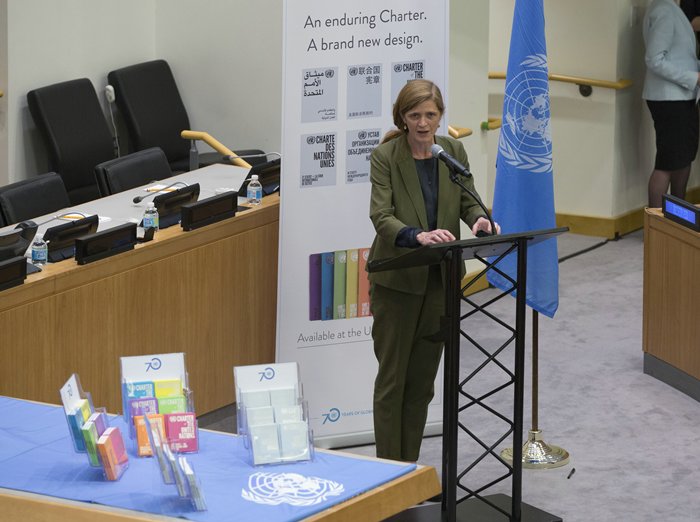 Thank you so much. It’s a great honor to speak to you here on behalf of the host country, the United States – we’re incredibly proud of this role that we get to play, thanks to the founders. Deputy Secretary-General Eliasson, Vice President of the General Assembly Gunnarsson, colleagues, ladies and gentlemen.

Greetings to you on this auspicious day as we look to the past and the future of our United Nations. I also want to greet Secretary-General Ban and all of those gathered in San Francisco, the birthplace of this institution and, today, the epicenter of what I assume will be some pretty massive and long overdue celebrations. I have to admit being jealous, Secretary-General Ban, that you get to experience San Francisco on the very day the United States Supreme Court ruled that same-sex marriage is a constitutional right. After years of tears, fears, and a long struggle for basic dignity, many, many individuals in this country – all individuals in this country – now have enshrined the right to love and to marry whom they choose. I can’t think of a better way to celebrate 70 years of the United Nations, than by witnessing this historic vote in favor, above all, of basic dignity. Today is an extra special day.

70 years ago, leaders from 50 nations came together to sign the United Nations Charter and commit to a radical goal – as U.S. President Ronald Reagan would later say – “to replace a world at war with one where the rule of law would prevail, where human rights were honored, where development would blossom, where conflict would give way to freedom from violence.”

By signing the UN Charter, those leaders also committed us, the world’s nations, and their descendants, to embark on a journey together in search of common ground toward common solutions by way of our common efforts. They agreed on a foundation of core principles that we continue to share today, even as global crises test our resolve and force us back to the table – one tough negotiation after another in service of the world’s people.

As we look to the next 70 years, it is fitting that today we commemorate how it all began.

A few years back, my husband, Cass Sunstein, was rummaging through some papers belonging to his late father, U.S. Navy Lieutenant Dick Sunstein. Lieutenant Sunstein wrote to his family after stopping in San Francisco on his way home from fighting in the Pacific during World War II. He happened to be in San Francisco on April 25th, 1945, just as the United Nations Conference on International Organizations got underway in the San Francisco Opera House.

San Francisco must have been abuzz at that moment – maybe not that different from today. But then, thousands of young Americans continued to board ships bound for battle, while others returned weary and broken from years spent on the front. That day would prove to be the last allied B-17 attack against Nazi Germany and the Soviet Red Army would surround Berlin. The newspapers were still reporting fighting and casualties, but peace finally seemed to be on the horizon. The arrival of delegations from countries large and small into San Francisco’s port must have added to that excitement, imbuing the air with a whiff of hope after years of so much loss. It was in the frenzy of aspiration and promise that Dick Sunstein, my father-in-law, who I never got to meet, wrote, “Conference starts today. The town is going wild with excitement. It is a pleasure to be here for the opening few days. Let’s pray that they accomplish something.” We found this letter, it was amazing – “Let’s pray that they accomplish something.” 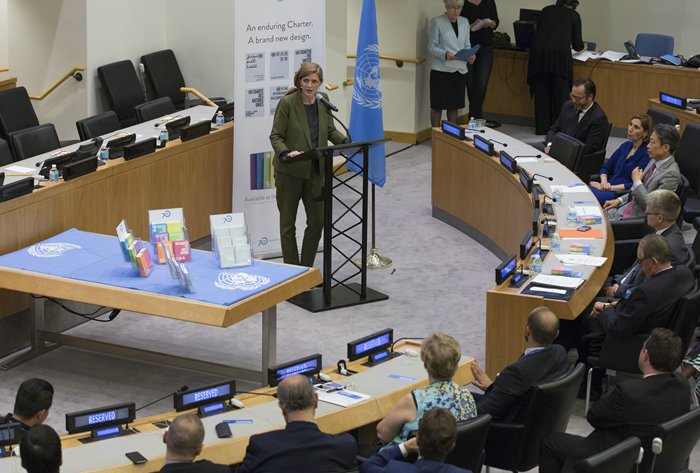 The signatures on the UN Charter that June day were making both a plea for peace and a promise; a promise to future generations that nations would work harder to protect them from the scourge of war; to reaffirm basic human rights and dignity; to establish conditions under which treaties and international law could be maintained; and to promote social progress and better standards of living for everyone. The U.S. representative to San Francisco, Secretary of State Edward Stettinius said, “I believe all places and peoples of the world demand this of us and the governments represented at this conference must not and will not fail them.”

The signatories themselves may not have agreed on everything, but in drafting the UN Charter, they shared this common vision – they shared a vision to adhere to the Golden Rule. That’s the essence of what we’re here for. A version of the Golden Rule exists in nearly every corner of the world. In the New Testament of the Bible it is stated as, “Do unto others as you would have them do unto you.” A version of this is in the Talmud and the Quran. It is expressed by the Bahai, Hindus, and Sikhs. It is part of Confucianism, Taoism, Shintoism. It is our universal prayer for peace, for protecting the weak, and for defending the dignity and rights of all peoples.

Imagine a global institution based on this most basic and inherently good of principles. Those gathered in San Francisco somehow did imagine it. And I wonder if they could have imagined how many millions of people today would rely on the promise of that baby blue and white flag.

Over the years, the United Nations would deploy huge peacekeeping missions and oversee complex peace processes in six continents. Could they have foreseen that this institution would rise to confront the challenge of HIV/AIDS, illiteracy, mass atrocities and ethnic conflict? Or that just last year, it would build the airplane, while it was flying it, to confront the massive epidemic of Ebola?

This past week, UNMEER reported 20 confirmed cases in the three affected countries, down from a peak of 800 weekly cases in September 2014. Imagine what the United Nations might have done in the face of the global influenza epidemic of 1918.

The United Nations has seen great changes and the international community has accomplished much. Fifty original signatories to the UN Charter have become 193 Member States. The birth country of Secretary-General Ban did not exist as an independent nation, and yet today, the Republic of Korea is a success story both of democracy and development.

South Africa today stands as a beacon of racial reconciliation and justice not so very long after standing as the symbol of apartheid. And India, which was not even independent in 1945, is today the world’s largest democracy and an emerging world leader. The United Nations has been a part of the great stories that have unfolded in each of these countries and in many of yours.

Even with all of that under our belts, there are many people in my country – and perhaps people in many of your countries as well – that don’t believe the United Nations serves its full purpose. They believe we are broken, an institution of strife and inaction in the face of too much pain around the world.

These people are not entirely wrong. When they see allegations of sexual abuse among peacekeepers, and resolutions without accountability in the Security Council, and indicted war criminals walking free, it depresses all of us.

But we can be better, and we have to be better and do better because these United Nations matter more than ever. And I know this not just because of the collaborative conversations I get to have every day with representatives from around the world, even those with whom we vehemently disagree on some issue or another. But I know this – I know the United Nations matters because a woman in the Central African Republic told me that she took refuge in a UN-protected camp while militia rampaged through her neighborhood in Bangui. I know the United Nations matters because just two weeks ago, in Kyiv, Ukraine, dozens of people told me that the entire country stops to follow UN Security Council sessions on live television. We may not have the viewership of the World Cup, I grant, but people do care. Our words matter, and our actions matter much more.

The United States salutes 70 years of the United Nations and today we pray that we will continue to accomplish great and vital things for the people of the world.