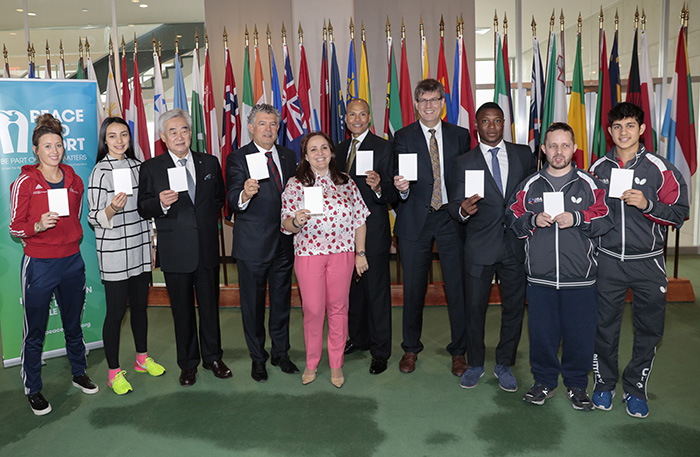 United Nations, New York, USA, 28 March 2017 – Press briefing by the Organization for Peace and Sport (Sport for Peace) on the role of sport as a tool to tackle the challenges that the international community is facing today at the UN Headquarters in New York.

Sports for Peace was set up during the preliminary stages of the Olympic Games 2008 to address the question of whether sport or major sporting events can foster common ideals. In “Sports for Peace”, athletes from all over the world come together to promote the values of sport, such as fair play, tolerance, the Olympic ideal of freedom, international and intercultural understanding. As a politically independent initiative, “Sports for Peace” offers a neutral basis to foster the spirit of fair play, the sense of community and the elimination of prejudice

The practice of sport is a recognized instrument for promoting peace, as it disregards both geographical borders and social classes. It also plays a significant role as a promoter of social integration and economic development in different geographical, cultural and political contexts.

Sport is a powerful tool to strengthen social ties and networks, and to promote ideals of peace, fraternity, solidarity, non-violence, tolerance and justice. Tackling problems in post conflict situations can be eased as sport has the ability to bring people together. In its efforts to use sport as a catalyst for peace and social development, UNESCO has supported several initiatives in the past years