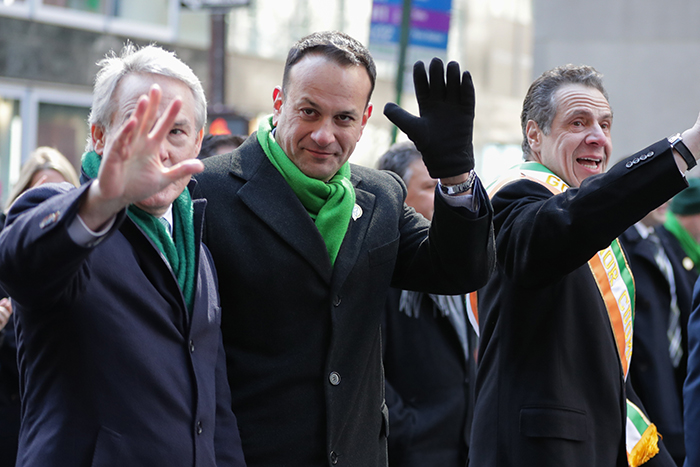 Ireland’s Prime Minister Leo Varadkar, flanked by Long Island Republican Congressman Peter King, announced his government’s multi-million dollar grant for an Irish cultural center in Hell’s Kitchen. He also recounted traveling to Oklahoma to visit to Native American tribe which after suffering its own loses in the Trail of Tears raised money for the Irish during the potato famine.

Cuomo, noting that Varadkar is openly gay, contrasted it with the controversies in the 1990s about LGTB groups being excluded from the parade. This year, at least two such groups marched.

Varadkar also attended the mass, and in a session with the media said, “I had a chance to meet the Mayor earlier and attend Mass, and I’m going to be able to march in the parade now with my partner which is something that is a sign, I think, of change, a sign of great diversity, not just in Ireland, but in the community here as well,” Mr Varadkar said. Speaking of his Thursday meeting with U.S. President Donald Trump, Varadkar said, “I think he was definitely aware of Irish issues. I think he was certainly aware of issues around the Irish border and the need to avoid a hard border. “I wouldn’t say he was an expert on Ireland but he certainly had an awareness of issues relating to Ireland and gave us a lot of time during the day which I think was very welcome.”

Between 1850 and 1929, an estimated 4 million Irish immigrants. came to the United States.