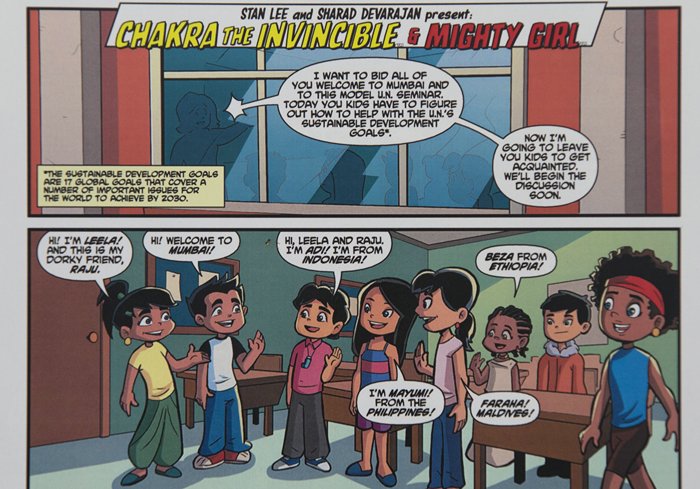 Paris, Dec. 11 – In September this year, the UN adopted the post-2015 development agenda and with it 17 Sustainable Development Goals (SDGs), also called the Global Goals. Various communication campaigns have been conducted to promote the SDGs, among them the launch of a new series of comic books. The UNICEF-backed initiative Comics Uniting Nations has released three books so far: Heroes for Change, Chakra – Gender Equality and Chakra – Climate Change.

The latest comic has been released on December 10. “We wanted to tie the release of that particular comic, which addresses goal number 13 among the 17 SDGs, to COP21 in Paris,” Olav Kjorven, Director of Public Partnerships at UNICEF, told Europa Newswire.

“The second comic in partnership with Stan Lee and Sharad Devarajan is on climate change,” Kjorven said. “It tells the story of what climate change is all about and what it means for children and young people.”

“The comic’s story follows a Model United Nations group discussing the effects of climate change on children and their countries. They decide to call on their superhero friends Chakra the Invincible and Mighty Girl, who try to fix the surface of the problem. … But they soon realize that climate change is too complex to address action by action, even with superpowers. Instead, each community has to learn how to work together and do its part,” Comics Uniting Nations explains.

In order to reach as many people as possible, the initiative started working with world-famous comic creators Stan Lee and Sharad Devarajan. In 2013, the two created Chakra the Invincible, a comic superhero who is now very famous in India.

“The first comic that came out around the time of the General Assembly was one that kind of presented the totality of the new agenda of sustainable development and why these goals are important. … Sharad Devarajan decided to work with us to produce comics that would tell the story of the different goals using iconic superhero characters that already exist,” Kjorven said. 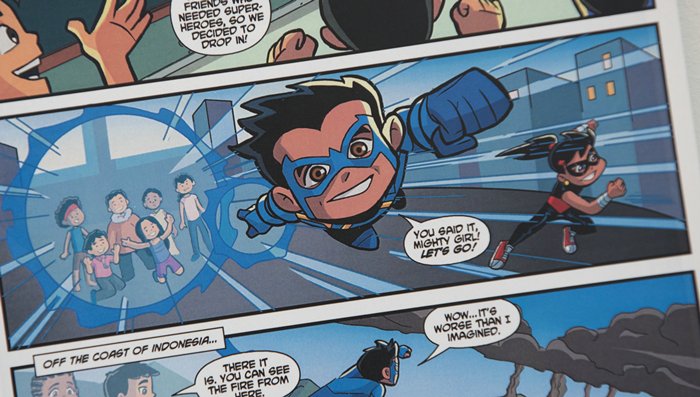 Chakra the Invincible’s best friend is the character Mighty Girl, who has been created for the purpose of this new series. The second comic book was the first collaboration of Stan Lee and Sharad Devarajan regarding the promotion of the SDGs.

“We wanted to cover different media markets around the world with this messaging. And then Sharad Devarajan, working together with Stan Lee, started working on the specific comic addressing gender and equality. That one was released in October with a lot of interest. It’s a very exciting story, it really brings out what it’s like to be a girl in a country like India and everything you have to suffer through over the course of a normal day,” Kjorven said. “If you are a girl in India you need to actually be a superhero just to survive and get through the day and so that kind of gets through to a lot of male young readers, the importance of addressing gender equality.”

The comics are available for download (http://www.comicsunitingnations.org/comics/) and will be promoted in a project called “The World’s largest lesson”.

“In addition to other media, other ways of communicating, which of course we do, we’ve also made the goals available to children through the schools throughout the world, something called the world’s largest lesson, so that child-friendly material can be introduced in the classroom and children can learn about the goals and what they mean for them,” Kjorven said.

Comics Uniting Nations has plans for many other books as part of the series.

“The idea is to have, for now at least, a story for each of the goals. But I don’t think we’ll stop there,” Kjorven said.

Comics are a great way of promoting the post-2015 development agenda to children and comic fans around the world.

“We wanted to use the medium of comics to reach out in an engaging and understandable way what the Global Goals are all about and why they are important. … It is a fantastic medium, I am almost a little bit embarrassed that the United Nations has not realized this much earlier. … In the conversations that we started having with the likes of Sharad Devarajan, we realized that this is an enormous opportunity because hundreds of millions of people around the world are really passionate about comics, they read a lot of comics, and we hadn’t really used that medium to get our advocacy and our messages out,” Kjorven said. “You tell stories that are easy accessible and engaging and it really in a very effective way communicates to children audiences why the stuff that we’re working on at the UN, why it actually matters to them.”