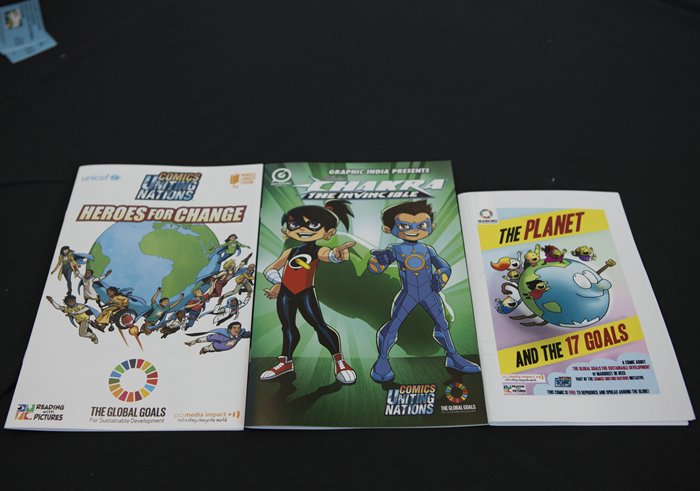 NEW YORK – Chakra the Invincible, the comic character created by Stan Lee and Sharad Devarajan, is been enlisted along with other major superheroes by the United Nations. Their mission will be to help reach and tell a worldly audience about the 17 global goals for sustainable development. Ranging from ending poverty to ensuring food security for all, from protecting the planet to guaranteeing peace, justice and strong institutions, the 2030 agenda, which was adopted on 25 September 2015 at the UN by world leaders, can only be met if “governments, the private sector, civil society and people like you” actually become familiar with the goals it comprises. Coming to the rescues, the art of comics, a universal language used this once to convey such political messages to millions of people everywhere – diverse in age, culture and interests -, in an amusing way.

“There are a lot of goals – 17 in all – but there is a way to make these understandable and accessible to people of all ages…and make them fun to learn about – through the powerful entertainment medium of comics”, said Olav Kjørven, Director of Public Partnerships at UNICEF, who joined a panel within a fully-packed New York Comic Com at the Javits Center, on 10 October 2015.

“Comics can address challenging topics in unique and entertaining ways, and they can reach people that – frankly speaking – would not otherwise be particularly interested in global goals adopted by the United Nations! By articulating the principles and values of the global goals through stories, imagery and even some famous characters, we can get people to think about these critical issues and what they means to their lives, their family and their communities”, added Kjørven. Seventeen comic books have been developed, one for every goal, each one by an assorted group of distinguished cartoonists from all around the world.

This way, the hero Chakra will be employed to illustrate gender equality (5th sustainable development goal), particularly to children in India, where he is well-known and “discrimination, harassment and violence against girls and women is, sadly, still commonplace”. A switch between superhero Raju (alter-ego Chakra)’s mind to neighbor girl Leela’s body (and viceversa) will have the boy experience what is like to be a girl, doing housekeeping works, and being excluded from studying and playing, which he was used to as a boy. Fitting back to his own shoes, Raju becomes more sensitive to “gender equality’, along with the readers, believe the organizers of the campaign. The readers, especially the children – as the future of the society – are called to become superheroes themselves, to act as “Heroes for Change”, turning such goals into a reality. This is why the 17 books are available in print as well as online for free download, and translated into many different languages. NGOs and schools will play a major role in distributing the comics worldwide.

The UN/UNICEF and Entertainment Education NGO PCI Media Impact initiative “Comics Uniting Nation” is realized in partnership with comic books and literacy nonprofit Reading with Pictures, and brings together creative talents from all over the world along with a significant number of publishers and distributors, including IDW Publishing. They all will allow the campaign to use brand characters for the making of single-page, SDG-focused Public Service Announcements (PSA) – one per book.

Among the characters used for PSAs, there are The Higher United Nations Defense Enforcement Reserves (T.H.U.N.D.E.R.) Agents, that yesterday were also protagonists of the panel held at the Javits center, with many announcements fans will love to hear. Created in 1965 by comic book legend Wally Wood, T.H.U.N.D.E.R. Agents was the first international comic book super hero group, brought to life to work for the UN. Steve Ditko (co-creator of Spider-Man and Dr. Strange), Gil Kane (co-creator of Green Lantern and The Atom), Mike Sekowsky (original artist of Justice League) are some of the artists who marked the stories with their talent. 50 years after T.H.U.N.D.E.R. Agents’ assembling for global protection, the franchise will expand into films, television, gaming and other entities, declared Huayi Brothers Media Corporation President James Wang and Michael Uslan, originator and executive producer of the Batman film franchise, and producer David Uslan. 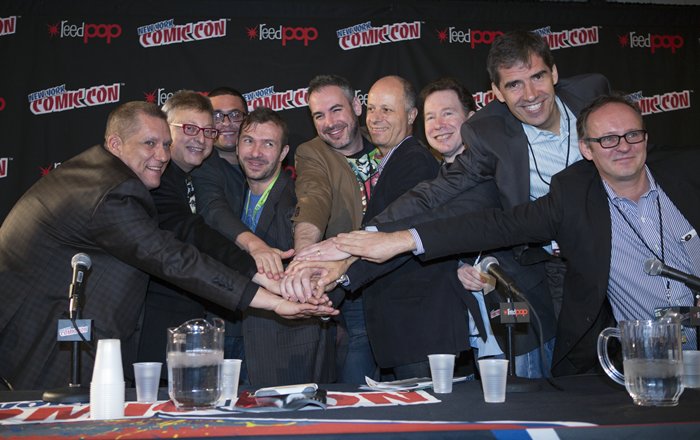 The T.H.U.N.D.E.R. Agents movie is supposed to hit the big screen in 2018. It will be filmed in the US, China and other international locations. A prestigious director may join the team, and be announced during the American Film Market next month in Santa Monica, said David Uslan.

New York Comic Con is a major event in the Big Apple and the East Coast. Comics, graphic novels, anime, manga, video games, toys, movies and television are at the heart of the convention, for which tickets quickly sold out this year (8-11 October), as for previous editions.