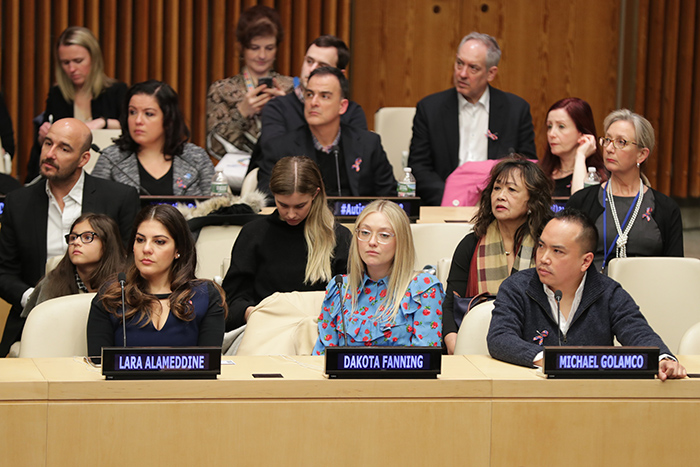 UN, April 5 — This year’s film “Please Stand By” in which Dakota Fanning plays an autistic young writer named Wendy who has written a Star Wars related screenplay and wants nothing more than to go and live with her sister, was discussed at the United Nations on April 5. Dakota Fanning explained her interest in bringing to the screen characters and conditions not sufficiently seen. While some have criticized the film for having a lead actor who is not, in fact, autistic, writer Michael Golamco says they hired as many autistic actors as possible to appear in the movie.

The occasion was a session at the UN called “Empowering Women and Girls with Autism,” co-sponsored by the Permanent Missions to the UN of Argentina, Bangladesh, Bulgaria, Denmark, Israel, Italy, Kazakhstan and Poland. Speaking on the panel from the film, beyond Fanning and Golamco, were producer Lara Alameddine and director Ben Lewis.

The UN Department of Public Information’s engagements with films have included Wonder Woman and Angry Birds; Thursday’s quieter approach for many worked better. The UN itself explains tat “throughout its history, the United Nations family has celebrated diversity and promoted the rights and well-being of persons with disabilities, including learning differences and developmental disabilities. In 2008, the Convention on the Rights of Persons with Disabilities entered into force, reaffirming the fundamental principle of universal human rights for all. Its purpose is to promote, protect and ensure the full and equal enjoyment of all human rights and fundamental freedoms by all persons with disabilities, and to promote respect for their inherent dignity. It is a vital tool to foster an inclusive and caring society for all and to ensure that all children and adults with autism can lead full and meaningful lives.

The United Nations General Assembly unanimously declared 2 April as World Autism Awareness Day (A/RES/62/139) to highlight the need to help improve the quality of life of those with autism so they can lead full and meaningful lives as an integral part of society.

Autism is a lifelong neurological condition that manifests during early childhood, irrespective of gender, race or socio-economic status. The term Autism Spectrum refers to a range of characteristics. Appropriate support, accommodation and acceptance of this neurological variation allow those on the Spectrum to enjoy equal opportunity, and full and effective participation in society.

The rate of autism in all regions of the world is high and the lack of understanding has a tremendous impact on the individuals, their families and communities.

The stigmatization and discrimination associated with neurological differences remain substantial obstacles to diagnosis and therapies, an issue that must be addressed by both public policy-makers in developing nations, as well as donor countries.”

Earlier in the week UN Secretary General Antonio Guterres said, “we stand up for the rights of people with autism and speak out against discrimination. This year’s observance highlights the importance of empowering women and girls with autism. They face multiple challenges including barriers to accessing education and employment on an equal footing with others, denial of their reproductive rights and the freedom to make their own choices, and a lack of involvement in policy making on matters that concern them.”

This could meaningfully be applied to Dakota Fanning’s character Wendy in “Please Stand By.” While working intently on her screen play, even her sister initially says she can’t come to live with her and meet her niece, despite Wendy holding down a job at a local Cinnabon. Finally Wendy sets off on her own, with an earnestness that is all too rare at the UN.