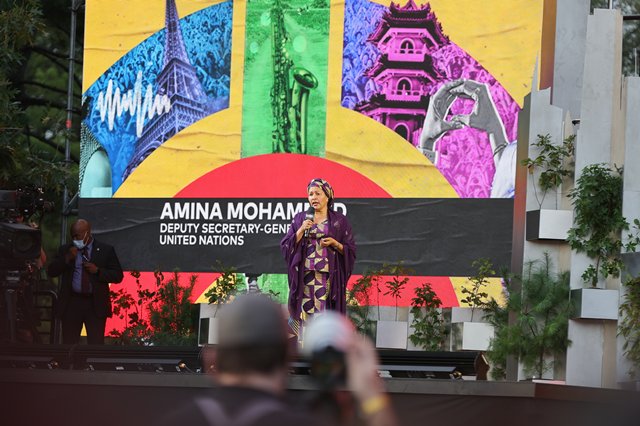 NEW YORK, 12 October 2021 – The twenty-sixth session of the Conference of the Parties (COP 26) to the United Nations Framework Convention on Climate Change (UNFCCC) will be hosted by the United Kingdom, in partnership with Italy, from 31 October to 12 November 2021 in Glasgow, Scotland. Just days before that, the Group of Twenty Leaders’ Summit will convene on October 30-31 in Rome, Italy. Ahead of such close multilateral forums, the UN’s reiterated calls for “decisive action” resonate strongly.

The outburst of the COVID-19 pandemic lead to postponing COP26 by a year, which makes the summit even more urgent: such an unprecedented crisis “has brought devastation to millions around the world, disrupting many parts of the global economy. But climate change has continued, and it ultimately threatens life on earth”, stressed COP26 President Alok Sharma.

Ambitious actions to bend the temperature curve will be addressed by the over 190 world leaders expected to join the conference: “The decade out to 2030 will be crucial. So as momentous as Paris was, countries must go much further to keep the hope of holding temperature rises to 1.5 degrees alive”, the UK’s guide to COP26 reads.

Climate change is also a focus of the 2021 G20, under the Italian Presidency. Faced with the impact of COVID-19, the Forum has identified people, planet, and prosperity as “three broad, interconnected pillars of action”. Its agenda is based on “taking the lead in ensuring a swift international response to the pandemic – able to provide equitable, worldwide access to diagnostics, therapeutics, and vaccines – while building up resilience to future health-related shocks”.

The G20 also expressed “intent on paving the way to rebuilding differently in the aftermath of the crisis”, touching on a wide set of objectives, in line with the Sustainable Development Goals. As reported on the G20 agenda, such include tackling inequality, eradicating poverty, promoting sustainable urbanization and green recovery as well as renewed economic growth. The conclusions of the Rome Summit will mention specifics.

“Hunger is on the rise everywhere. Famine, a growing reality for millions affected by conflict, COVID, and climate change. But famine and hunger alongside poverty are not just about the absence of food. They are about the absence of decisive action by our leaders”, said Ms. Mohammed from the stage of the Global Citizen Live concert in New York’s Central Park.

Ms. Mohammed also recalled UN Chief’s “wake-up call”. On September 21 addressing UNGA76, with reference to the impact of the pandemic, climate change, and war, he said: “I am here to sound the alarm: The world must wake up. We are on the edge of an abyss — and moving in the wrong direction”.

UN Deputy Secretary-General then asked the Global Citizen Live audience to join the Organization in that appeal: “As global citizens, call, text or tweet the G20 and other leaders. Push them to fund zero hunger, transform our food systems, get vaccines to everyone, continue to defend the planet, and defeat poverty. Help us keep the promise of the SDGs”.

The Global Citizen movement refers that more than US$1.1 billion, 157 million trees, and over 60 million COVID-19 vaccines were announced during the live broadcast event.