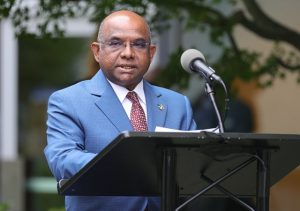 Mr. Abdulla Shahid convening the High-level Thematic Debate at UNHQ on 25 February,
an opportunity to share lessons learned and identify the key challenges to distribution

NEW YORK, 8 February 2022 – “The only way to stop new [COVID-19] variants,
potentially more lethal ones from forming are through vaccinations”. Abdulla
Shahid, President of the 76th session of the United Nations General Assembly reiterated
to Europa Newswire the urgency of promoting vaccine equity to recover from COVID-19,
ahead of a High-level Thematic Debate, he will convene at the U.N. Headquarters on 25
February to “Galvanize momentum for universal vaccination”.
“Omicron is one of the latest variants. For people who are vaccinated, the data shows that
the risk of developing a serious disease or needing hospitalization might be lower than from
Delta. But there are continually new variants”, said Mr. Shahid, stressing the importance of
equal access to effective and affordable vaccines for all, and addressing a growing
perception that Omicron is a milder variant than others – a narrative World Health
Organization Director-General Tedros Adhnanom Ghebreyesus called “misleading” and
“dangerous”.
On the same note, in his Tuesday briefing, Mr. Tedros said that “this virus is dangerous,
and it continues to evolve before our very eyes. WHO is currently tracking four sub-
lineages of the Omicron variant of concern, including BA.2”. Calling on countries to
continue testing, surveillance and sequencing, he also pointed to the need to “ensure that
all people have access to vaccines. It’s also clear that as this virus evolves, so vaccines
may need to evolve,” he warned.
Indeed, the United Nations Development Programme (UNDP) Data Futures Platform,
which aggregates data provided by U.N. entities, quantified the current vaccination gap as
of 2 February: 67.92% of the population has been vaccinated with at least one dose in
high-income countries, while in low-income countries, that figure drops to 11.67%. Another
disparity is found in the affordability of vaccines across the world: to cover the cost of
vaccinating 70% of their populations over one year, low-income and high-income countries
need to increase their health care spending respectively by 0.8% and 56,6%.
Mr. Shahid – who made “Recovery from COVID-19” the “first and foremost priority” of his
“Presidency of hope” [his other priorities are rebuilding sustainably, responding to the
needs of the planet, respecting all human rights, and revitalizing the United Nations] – will
host the High-level Thematic Debate to “Galvanize momentum for universal vaccination” at
UNHQ on 25 February. Originally planned for 13 January, but rescheduled, due to a surge
in Omicron cases in New York, the event will provide an opportunity for the Member States
and other stakeholders to “review existing challenges in vaccine production and
distribution, renew political commitment and multi-stakeholder engagement to achieve
universal vaccination in the shortest possible period of time”, a PGA letter to all Permanent
Representatives and Permanent Observers to the U.N. reads. Improvement of vaccine
absorption capacity, delivery rates, and supply predictability will also be discussed.

To advance the universal vaccination cause, the President might also point to the “New
Year’s resolution on vaccine equity” – a social campaign he launched on 1 January to
stress the importance of vaccine equity in ending the pandemic, which gained the support
of nearly 130 Member States. Dozens of U.N. entities and senior officials have also joined,
including Dr. Tedros, who in a 6 January media briefing on COVID-19 called “vaccine
inequity and health inequity overall the biggest failures of last year”.

Speakers from outside the UN will also take part in the 25 February event, including “front
liners, people from our local NY community and abroad, scientists working on vaccines,
foundations supporting their distribution, and big names talking about the need to get
vaccines to their countries”, PGA Spokesperson Paulina Kubiak Greer announced, adding
that a speakers list will be released in two weeks.
On the topic of vaccine-hesitancy, she said “the focus for the Office is on getting the
vaccines to places that need them and get them distributed. Although, of course,
misinformation and verified information is always an issue that creeps in.”