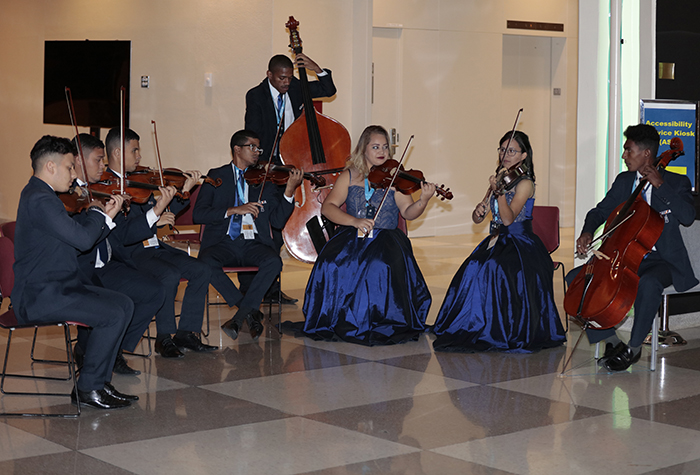 UNITED NATIONS, 14 December 2016 – The United Nations commemorated UNICEF’s 70th Anniversary with a special event at the UN Headquarters this Monday.

The United Nations Children’s Fund (UNICEF) is a UN programme that provides humanitarian assistance to children and mothers and defends the rights of every child. The programme started after World War II, providing emergency food and healthcare to children whose countries had been devastated by the war.

For UNICEF’s 70th Anniversary, the UN invited a list of high-level guests. Among them were David Beckham, Jackie Chan, Priyanka Chopra and Orlando Bloom.

The event was moderated by 12-year-old actress Millie Bobby Brown, who stars in the Netflix series Stranger Things.

Secretary-General Ban Ki-moon used this special occasion to open up about about his own experiences as a child.

“I would not be where I am today without UNICEF. When I was six years old, the Korean war broke out. I had to flee my village, I was hungry and in need. That’s when the United Nations came. I was one of millions of Korean children who received food packets from UNICEF. As a Secretary-General, I have wanted to do for other children what the United Nations did for me,“ said Ban Ki-moon in a video address.

His wish for children around the world is also the motto of UNICEF’s 70th Anniversary: “For every child, hope.“

World-famous martial artist Jackie Chan introduced author and former child soldier Ishmael Beah from Sierra Leone. Ishmael Beah, who is now a Goodwill Ambassador, was recruited as a child soldier at the age of thirteen. He lost his family to the Sierra Leone Civil War and was later made to fight in this war himself. He was saved by UNICEF when aid workers rescued him from his camp.

“They put us in a car and told us that we would become children again. I was saved,“ said Beah.

Former soccer player David Beckham has been a UNICEF Goodwill Ambassador for fifteen years and spoke about his experiences with the organization.

“It began in Thailand fifteen years ago, where I was with Manchester United and we went to a women’s center where they were helping these young ladies. That’s where it began for me,“ said Beckham.

It was also a special evening for Indian actress Priyanka Chopra, who was appointed as a UNICEF Global Goodwill Ambassador at the event.

“My involvement with UNICEF started ten years ago in India. Today I stand here humbled, enriched, committed, because of that exact experience. … I want to thank UNICEF for giving me this opportunity to extend the work that I can do to the world,“ said the newest UNICEF Goodwill Ambassador. 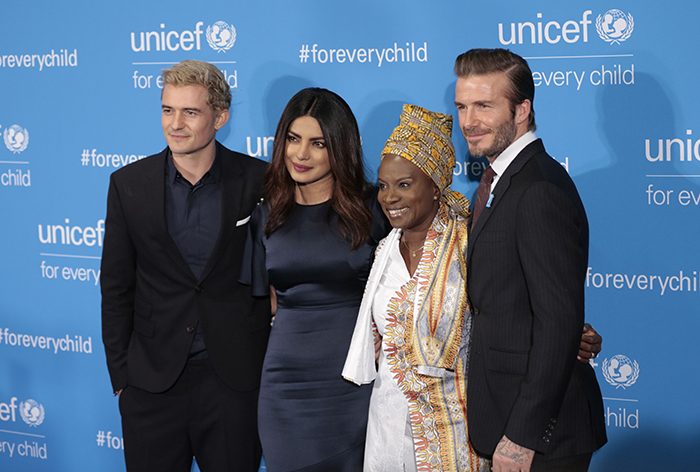 Hollywood actor and UNICEF Goodwill Ambassador Orlando Bloom was also among the guests.

Performers included Grammy award winning singer Angélique Kidjo from Benin and Nigerian musician Femi Kuti. Kidjo shared some of her own memories of the organization’s work in her home country.

“UNICEF has been part of my life since I was a little girl,“ said Kidjo. “The fact that my parents stood for education has transformed and changed my destiny.“