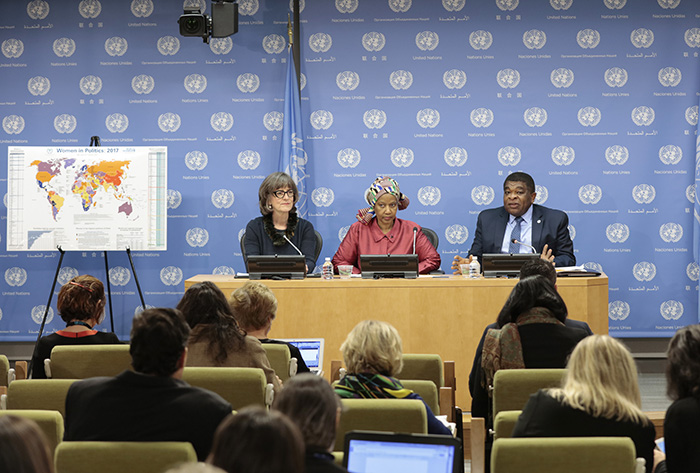 UN Women chief Phumzile Mlambo-Ngcuka told reporters today women’s representation in parliaments and governments worldwide has seen “overall stagnation” citing reversals in some countries, and “the persistent missing voice of women where it matters most.”

“Women in Politics” map for 2017, was launched today by the Inter-Parliamentary Union (IPU) and UN Women. The map presents global rankings for countries in terms of the percentage of women in the executive and parliamentary branches of government as of 1 January 2017. It showed that the number of women in executive government and in parliament worldwide has stagnated, with only marginal improvements since 2015. Mlambo-Ngcuka said it was clear from the map that “leadership and political will is critical” as only five Heads of States were passionate enough to provide gender balanced cabinets. She said if more Heads of States were “passionate about this issue, we could easily solve of representation of women in cabinets.”

The Executive Director said there was still a place for optimism as some progress was not quantifiable. She said some areas of greater involvement by societies in supporting women even if that did lead to more women in political offices, adding that “the fact that you are seeing so many men and boys who are becoming feminists and dedicating their life resources and energy to fight for women, that shows that we are extending and expanding the constituency of feminist agenda activists.”

IPU Secretary-General Martin Chungong said despite some gains in women’s representation, the setbacks showed that this could not be taken for granted if more robust measures were not taken to maintain the momentum. He said the countries that were doing well are the “younger democracies” in Latin America and Africa, while some European countries and the United States were “not doing that well.” He said something needed to be done to “rethink democracy.” Chungong stressed that ruling parties and opposition parties alike had the responsibility to promote gender equality in politics.

Data from the map showed that the global average of women in national parliaments increased just slightly from 22.6 per cent in 2015 to 23.3 per cent in 2016. Rwanda, Bolivia, Cuba, Iceland, and Nicaragua rounded out the top five countries with the highest percentage of women parliamentarians while the United States ranked 104th. Bulgaria, France, Nicaragua, Sweden and Canada have surpassed the 50 percent mark of women in ministerial positions which could largely attributed to a clear political commitment at the highest decision-making level as well as a genuinely gender-sensitive political culture.