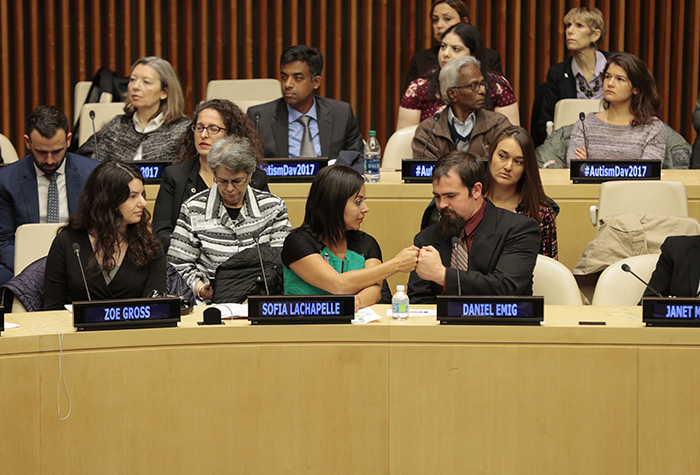 Ahead of World Autism Awareness Day (WAAD), Secretary-General António Guterres issued a statement today (31 March), calling for a change of attitude towards persons with autism “and in recognizing their rights as citizens.”

The statement read at a special event at UN Headquarters in NY by Under-Secretary-General for Communications and Public Information Cristina Gallach, said that “like everyone else” people in the autism spectrum “are entitled to claim those rights and make decisions for their lives according to their own will and preferences.”

Simon Baron-Cohen, who is the Director of autism research at the University of Cambridge, told the meeting that “individuals with intellectual disability, including those with autism, are three times more likely to be victims of abuse or neglect, robbery or assault.”

Baron-Cohen said that “on this first human right, the right to dignity, as civilized nations we are failing to protect the rights of people with autism.”

The WAAD observance, on 31 March 2017, discuss policies and approaches being implemented with regard to guardianship and the path to self-determination and legal capacity of persons with autism.

On this World Autism Awareness Day, let us all play a part in changing attitudes toward persons with autism and in recognizing their rights as citizens, who, like everyone else, are entitled to claim those rights and make decisions for their lives in accordance with their own will and preferences. Let us also renew our promise, engraved in the 2030 Agenda for Sustainable Development, to leave no one behind and ensure that all people can contribute as active members to peaceful and prosperous societies.

As the United Nations Convention on the Rights of Persons with Disabilities points out, legal capacity and equal recognition before the law are inherent rights that persons with autism enjoy on an equal basis with other members of our societies.

In the exercise of those rights and their freedom to make their own choices, let us ensure that we make available the necessary accommodations and support to persons with autism.  With access to the support they need and choose, they will be empowered to face the key milestones in every person’s life, such as deciding where and with whom to live, whether to get married and establish a family, what type of work to pursue, and how to manage their personal finances.

When they enjoy equal opportunity for self-determination and autonomy, persons with autism will be empowered to make an even stronger positive impact on our shared future.